Breaking
You are at:Home»USA»Indirect US-Iran talks in Vienna : will Washington’s firm stance on full Iranian compliance as a condition for lifting sanctions crack ?

‘’We are not and will not offer any unilateral gestures or incentives to sweeten any sort of deal or to induce Iran to – back to the negotiating table or to a better position at that negotiating table,’’ declared this week U.S. State Department Ned Price as he was asked by reporters about the Vienna indirect talks aimed at reviving the Joint Comprehensive Plan of Action (JCPOA), the 2015 nuclear deal with Iran from which Washington withdrew under former President Trump.

The talks in the Joint Commission of the JCOPA resumed on Friday in the Austrian  capital  on bridging what the U.S. calls “tremendous and profound differences” over how to salvage the nuclear agreement.

The Joint Commission is responsible for overseeing the implementation of the JCPOA. It is chaired, on behalf of EU foreign policy chief Josep Borrell, by the EU’s external service Political Director Enrique Mora and was attended by representatives of China, France, Germany, Russia, the United Kingdom and Iran.

Both Washington and Tehran Both described the indirect talks on Tuesday as a “useful step” and “constructive” despite neither representative actually meeting face-to-face.

“As Coordinator, I will intensify separate contacts here in Vienna with all relevant parties, including US,” he said.

Two working groups have been established to set the framework for negotiation. The first group is focused on the issue of U.S. sanctions against Iran, which were imposed by the Trump administration after it left the original deal in 2018.

The second group is exploring how to bring Iran back into compliance with the limits set by the original JCPOA on enrichment and stockpiles of enriched uranium. Iran has repeatedly violated the terms of the agreement, causing concern among European and world signatories and stoking tensions among its neighbors in the Middle East

Washington is seeking a “compliance for compliance” approach, with President Joe Biden ruling out any “unilateral gestures” but still open to exploring how the U.S. might also resume its own compliance with the deal.

‘’Participants took stock of the discussions held at various levels since the last Joint Commission in view of a possible return of the US to the JCPOA and discussed modalities to ensure the return to its full and effective implementation,’’ a statement issued Friday by the EU said. ‘’The Joint Commission was briefed on the work of the two expert groups on sanctions lifting and nuclear implementation measures and participants noted the constructive and results oriented exchanges,’’ it added.

‘’Participants emphasised their resolve to further pursue the ongoing joint diplomatic effort. The coordinator will continue his separate contacts with all JCPOA participants and the United States. The Joint Commission tasked expert groups to continue their work and agreed to reconvene in Vienna in the course of next week.’’

The U.S. delegation is led by Special Envoy Robert Malley, who helped negotiate the original deal in 2015. “It would not serve the interests of America or American citizens if there were growing tension in the Middle East because of an expanding Iranian nuclear program. Getting back into the deal is very much, in our estimation, in the interest of the United States and of its citizens,” Malley said.

Responding a question from a journalist at the daily briefing, Ned Price said: ‘’The U.S. administration is committed, working in many cases with our allies and partners, to holding Iran to account for precisely the offenses you listed: its human rights abuses, its support for terrorism, its ballistic missile program. When it comes to those areas, that is precisely why our strategy sees the mutual return to the JCPOA as necessary but insufficient, insufficient because we seek not only a longer and stronger deal, but over the longer term, working with partners in the region, follow-on agreements to address these very issues.’’

U.S. President Joe Biden, who promised during his election campaign to return to the nuclear deal, is struggling to find the formula that would allow such a return—even a gradual one—due to Iran’s hardline positions and severe violations of the deal. Among other things, Iran has increased its enriched uranium stockpile, increased the level of uranium enrichment at its Fordow facility to 20 percent, reduced cooperation with the International Atomic Energy Agency (IAEA) and even installed advanced centrifuges at the site, while continuing nuclear-related research and development. At the same time, according to a recent IAEA report, Iran continues its uranium enrichment efforts at the underground facility in Natanz, using advanced IR-2m centrifuges. All this is designed to increase the pressure on the United States.

Israeli Prime Minister Benjamin Netanyahu said Wednesday that Israel would not be bound to a nuclear deal between world powers and Iran if that would enable the Islamic republic to develop nuclear weapons.

“An agreement with Iran that would pave the way to nuclear weapons — weapons that threaten our extinction — would not compel us in any way,” he said in a speech, on the eve of Holocaust Remembrance Day.

“There is one thing that compels us — to prevent those who seek our extermination from carrying out their plot,” he said at the Yad Vashem Holocaust memorial in Jerusalem.

According to IDF Lt. Col. (ret.) Michael Segall, an expert on strategic issues with a focus on Iran, terrorism, and the Middle East at the Jerusalem Center for Public Affairs, ‘’until recently, the U.S. administration was able to withstand the Iranian pressure and demand in return at least a gradual return to the framework of the negotiations. Given Iran’s determination and uncompromising stance, accompanied by the continued violations of the nuclear deal, perhaps the administration’s firm stance on full Iranian compliance as a condition for lifting sanctions will crack.’’

‘’Against this backdrop, it seems that the chances of the United States expanding and improving the agreement to include the issue of missiles, Iran’s harmful regional activities and human-rights violations in its territory are very slim,’’ he added.

Iran has sticked to a tough and uncompromising stance calling for the lifting of all sanctions if the United States wants to return to the nuclear deal.

”Looming in the background are Iran’s presidential elections, coming up in two months, which toughens Iran’s stance demanding the lifting of all sanctions and opposing “amendments” to the nuclear deal,” wrote Segall.

In an analysis, the Washington-based Foundation for Defense of Democracies (FDD) said a re-entry into the 2015 Joint Comprehensive Plan of Action (JCPOA) by the United States ‘’would be a disservice to America’s nonproliferation objectives, as well as to President Joe Biden’s Iran policy.’’

‘’Many of the major limitations included in the JCPOA and its accompanying UNSC resolution (2231) on the Islamic Republic’s nuclear and missile programs are set to expire or “sunset,” meaning Washington would be re-joining an accord that doesn’t block Iran’s pathways to nuclear weapons,’’ the FDD noted . 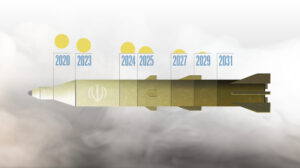 Key sunsets timeline under the JCPOA and UNSC resolution 2231.

‘’After 2031, there are no provisions that stop Iran from producing and amassing weapon-grade uranium.’’