Breaking
You are at:Home»Middle East»Project launched to renew and maintain the Jewish cemetery in Bahrein, the only one in the Gulf countries

The Association of Gulf Jewish Communities (AGJC), the umbrella organization for the Jewish communities in the Gulf Cooperation Council (GCC) countries,  has launched a project to renew and maintain the Jewish cemetery in Bahrain for perpetuity.

The initiative will kick-off with the Jewish holiday of Tu B’Shevat, also known as the ‘’New Year of the Trees’’, starting the evening of Jan. 16th.

Modern Jewish life in Bahrain began in the 1880s, when Jews from Iraq, were looking for better economic and living prospects and emigrated to Bahrain. Since then, Jewish life in the Kingdom has flourished and in the 1930s, the community established a synagogue and Jewish cemetery. The synagogue is the oldest in the GCC and the only operational one.

The more than 100-year-old cemetery is the only operational one in the GCC. The project aims to create a perpetual fund to maintain the cemetery.

“As we celebrate Tu B’Shevat, in the Jewish Tradition, as the Arboreal New Year, we are planting trees in the Jewish cemetery of Bahrain which is akin to bringing life back to those that have lived in the beautiful community in Bahrain for centuries and made their resting place in Bahrain for eternity,” said AGJC Rabbi Dr. Elie Abadie. “As our ancestors planted in their generation for the benefit of our generation, so too we plant in this generation for the benefit of future generations.” 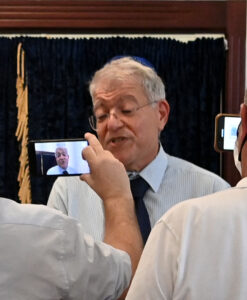 “For more than 100 years, our family members have been buried in the Jewish cemetery in Bahrain and one component of our community planning is ensuring that our cemetery is properly maintained for generations to come,” said AGJC President Ebrahim Dawood Nonoo. “We are very thankful that the AGJC chose this for its Tu B’Shevat project.”

The Association of Gulf Jewish Communities is enhancing Jewish life in the region. While each community is independent, they share a common goal and vision – for Jewish life to flourish in the Gulf for the benefit of both residents and visitors.

The AGJC oversees programming and services such as the Beth Din of Arabia, the Arabian Kosher Certification Agency, lifecycle events and other community programs.