Breaking
You are at:Home»EU»”Europe must side by Israel in its conflict with a terrorist group’

EU Foreign Ministers hold Tuesday an extraordinary video conference on the escalation between Israel and Hamas.

The conflict continued on Tuesday morning, with Israel bringing down a six-storey building in Gaza City as it continued to target Hamas with airstrikes. Terror groups in Gaza fired dozens more rockets into Israel. Two Thai workers were killed by a Gaza rocket which hit a package plant in southern Israel. Several other people are in critical condition.

The EU is divided on the Israeli-Palestinian conflict and experts doubt that a common position could be find on Tuesday, especially because EU policy toward the region requires unanimity among the 27 EU member states.

Among them,  four are amongst the most critical of Israel:  Belgium, Ireland, Sweden and Luxembourg.

Others, like Austria, the Czech Republic and Slovenia, have shown strong support for Israel. But also Germany, The Netherlands, Hungary, Romania and Bulgaria.

Israel has called on the European Union to step up its support for Israel, a democratic ally who is under terrorist attack, as EU Foreign Ministers are holding Tuesday an extraordinary video conference on the escalation of the conflict between Israel and Hamas.

In an interview with Euronews, Israeli Deputy Ambassador to the EU, Walid Abu Haya, declared: “What we want from Europe is very strong and unequivocal support.’’

He added, ‘’the EU cannot just play the game of trying to balance here. The situation is not balanced. All members have declared Hamas as a terror organization,” in a reference to the fact that Hamas is listed by the EU as a terrorist group.

Abu Haya said that Israel would defend itself as long as necessary ‘’with or without the EU’s backing.’’

“All efforts should be done now just to stop this terror,” he said. “Israel’s intentions are very clear. We are not stopping, we are going until we put an end to this attack by Hamas.”

‘’Israel has the right and must protect its citizens from terror and aggression,’’ he said after more than 3,000 missiles and rockets have been fired on the Israeli civilian population from Gaza. ‘’Such situation can’t be unanswered, neither by Israel nor by any other state at the same situation.’’ 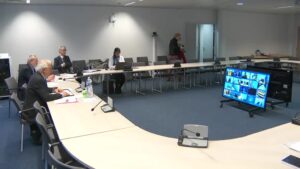 EU foreign policy chief Josep Borrell announced that an extraordinary videoconference of EU Foreign Ministers would be held on Tuesday “in view of the ongoing escalation between Israel and Palestine and the unacceptable number of civilian casualties”.

But the EU is divided on the Israeli-Palestinian conflict and experts doubt that a common position could be find on Tuesday, especially because EU policy toward the region requires unanimity among the 27 EU member states.

Among them,  four are amongst the most critical of Israel:  Belgium, Ireland, Sweden and Luxembourg.

Others, like Austria, the Czech Republic and Slovenia, have shown strong support for Israel.

The Israeli flag is flying over the Prague Castle upon Czech President Milos Zeman’s orders, to show support for Israel. A Czech spokesman said the flying of Israel’s flag over the seat of the Czech presidency symbolizes “a sign of unequivocal support and solidarity” between the two countries. 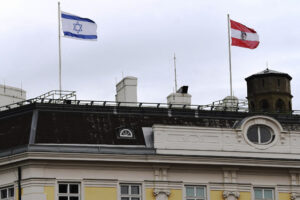 In Vienna, the Austrian Federal Chancellery raised the blue and white Israeli flag on official buildings.

In Vienna, the Austrian Federal Chancellery also raised the blue and white flag on official buildings. Austrian Chancellor Sebastian Kurz said in a statement: “I condemn with the utmost firmness the attacks against Israel from the Gaza Strip.”

“Israel has the right to defend itself against these attacks. To show our solidarity … we have put up the Israeli flag,” on the chancellery and the foreign ministry, a statement said.

“Nothing justifies the thousands of rockets that Hamas and other terrorist groups have fired up to now at Israel from Gaza,” said Austrian Foreign Minister Alexander Schallenberg. “We strongly support the security of Israel.”

Iranian Foreign Minister Mohammad Javad Zarif has cancelled a visit with his Austrian counterpart to show displeasure that the Austrian Chancellor  had flown the Israeli flag in Vienna.

In Ljubljana, capital of Slovenia, the country which will take over the European Union Council of Ministers during the second half of this year, Slovenian Prime Minister Janez Jansa tweeted: ‘’As a sign of solidarity with Israel, the Israeli flag is hoisted on the buildings of the government. We condemn the terrorist attacks and we stand by Israel.’’

In The Hague, Dutch Prime Minister Mark Rutte spoke Monday with Israeli Prime Minister Benjamin Netanyahu and expressed his ”unreserved support for Israel’s right to defend itself in light of the rocket fire from Gaza.”

In Eastern Europe, countries like Hungary, Romania and Bulgaria, are also among the strongest supporters  of Israel within the EU. 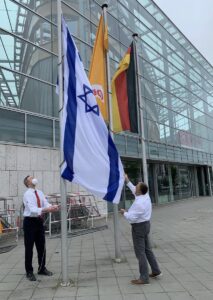 In Berlin, the CDU governing party in Germany, has flown the flag of Israel to show it’s solidarity.

Macron reiterated his “unwavering attachment to Israel’s security and its right to defend itself in line with international law.’’

The French President will hold talks with Egyptian counterpart Abdel Fattah al-Sisi and Jordan’s King Abdullah II Tuesday aimed at seeking a ceasefire in the conflict.

Italian Foreign Minister Luigi Di Maio, who is said to have requested to discuss the Mideast conflict, said “the violence and attacks between Israel and Palestine must stop.” In a Facebook post, he added that “the EU with its 27 member states must take a clear and unified position and work to press the parties to sit together again at the negotiation table.”

‘’While Israel is confident of support from allies such as Germany, it has less faith in Borrell, a former Spanish Socialist Foreign Minister, who has criticized Israel in the past, including in a statement at the end of April that suggested Israel was obstructing elections from being held in the Palestinian territories,” wrote Politico.eu.

The European Parliament will also debate Tuesday the escalation of the conflict between Israel and Hamas.