“These stones are very important for Brussels, because they are not only figures, they are names, they are families, children, men, women. They lived in this neighbourhood. And these pavements are very symbolic of the people who lived here,” said Brussels mayor Philippe Close who took part in the cleaning of the stones in memory of Holocaust victims.

‘’During the Holocaust, the Nazis forced Jewish people to clean the streets. Today we clean the cobelstones of the streets of Brussels to make the memory of those Jewish people shine,” said European Jewish Association Chairman Menachem Margolin as he addressed an event which saw dozens of volunteers taking part in a clean-up campaign of memorial pavements stones in the Belgian capital to mark  Yom HaShoah, the Holocaust Remembrance Day.

Among those who cleaned the more than 400 so-alled ‘’Stolpersteine’’ or Stumbling Stone in Brussels, was the city’s mayor, Philippe Close. Each engraved brass block is dedicated to the memory of a victim of the Nazi regime, usually placed in front of the victim’s former residence. The ‘’Stolpersteine’’ were conceived by the German artist Gunter Demnig in 1993

“These stones are very important for Brussels, because they are not only figures, they are names, they are families, children, men, women. They lived in this neighbourhood. And these pavements are very symbolic of the people who lived here,” said the mayor.

The cleaning event was organized by the European Jewish Association (EJA) and initiated by the international student-led ‘’Make Their Memory Shine movement’’ which is aiming to clean all 9000 Stolpersteine in Europe through an intercultural and educational environment. 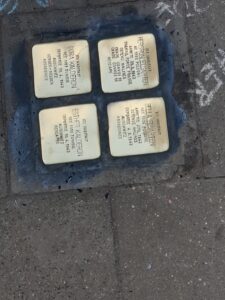 “We have to remember all those who did not come back from Auschwitz. And one of the manners to do it is the Stolpersteine that we clean today,” said Regine Suchowolski-Sluszny, a Holocaust survivor who is president of the Forum of Jewish Orgznizations of Flanders located in Antwerp.

“Because a lot of people do not have a place where they are buried, because they burnt,” she added. “It has to go on living on everybody’s soul that these people were murdered for nothing. Only because they had a Jewish mother,” she said.

A Belgian Christian couple helped her family to escape the Nazis and took care of her until she was reunited with her parents. She was then only two years and a half.

While authorities in Brussels and Antwerp collaborated in the Nazi round-ups of Jews, Belgian people saved about 5000 Jewish children from the Nazi regime. “50% of the Jewish people living in Belgium were saved. If you compare it to Holland, there was not even 20%,” said Regine Sucholswski-Sluszny.