The two-day conference, entitled “The Jews in Europe: United for a Better Future,’’ was organised in partnership with the Consistoire Central, the representative body of Judaism in France, in the premises of the newly inaugurated European Centre of Judaism.

The unveiled plan of actions, which according to Rabbi Margolin could improve the situation which has deteriorated over the years, includes a call for every European country to sign up and implement in full the IHRA working definition of antisemitism. 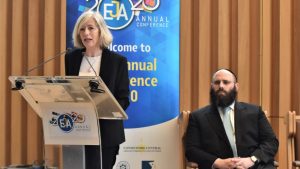 UNESCO Assistant Director General for Education Stefania Giannini: ”The fight against antisemitism requires political will. The fact that one third of Europeans have no knowledge of the Holocaust shows that ignorance is the real enemy.”

Other measures urgently needed include the appointment in each and every European country of a special envoy tasked with combating antisemitism. Such an envoy exists already in the EU, the UK, Italy, Germany, Bulgaria and Romania.

The plan also mentions the importance of education about the Holocaust and the contribution of Jews in Europe, which need to be included in updated school programs. Rabbi Margolin referred to a successful  experiment made in Hungary on one million schoolchildren.

Moreover, EJA called for a ban of the sale of Nazi symbols as well as a law enforcement for displaying stereotypes of Jews in public like during the recent carnival of Aalst in Belgium.

“After 20 years dealing with this subject, I have come to the understanding that no matter how many schools we visit and no matter how many delegations we bring to Auschwitz, it’s all just a drop in the bucket,” he said. “Therefore we realized that the way to fight anti-Semitism is to pass on the responsibility to European governments,” said Margolin, whose organisation is the largest federation of Jewish communities on the continent. 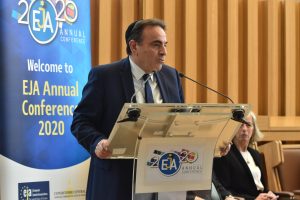 For Joel Mergui, President of the Consistoire Central of France, the Paris EJA conference marked the real launch of the new European Centre of Judaism, his brainchild, located in the 17th district of the French capital. This centre aims to become a platform of exchange and dialogue for Jewish communities and association in Europe.

‘’We can raise alarm calls but we cannot stop antisemitism. It’s up to the governments to act. Either they understand it or they don’t care. If they don’t act they won’t let any option to the Jews and this would mean the end of Jewish continuity in Europe. Today, Jews don’t feel they their respective governments protect them,’’ he added.

Margolin said that much of the role of Jewish community leaders going forward will be to lobby legislators to take action.

Several speakers stressed that antisemitism takes many different forms and is not always easy to identify.

Rabbi Margolin specified that he was going to propose the creation of a platform on the whatsapp social network making it possible to centralize anti-Semitic incidents – verbal or physical attacks – in the EU, because currently “most are not subject to complaints “.

“It is crucial that each government has a person responsible” for the fight against anti-Semitism, “because we see that we communities cannot, alone, eradicate it,” he said.

Paris Mayor Anne Hidalgo: ”One cannot understand Paris without its Jewish community. The European Centre of Judaism is located on Jerusalem Square, ”which shows the link with Israel.” 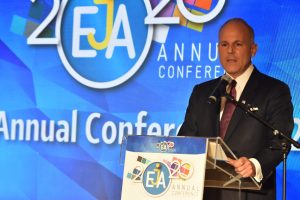 Elan Carr, U.S. Special Envoy Against Antisemitism at the State Department: ”75 years after Auschwitz, we see Jew-hatred on the rise in Europe and even in the U.S.”

Joel Mergui, president of the Consistoire Central, who initiated the construction of the European Centre for Judaism, said that the conference was a good opportunity to launch a platform of exchange between Jewish communities in Europe. ‘’We face the same problems but the responses are different from country to country,’’ he said.