Breaking
You are at:Home»Middle East»Al Habtoor City Hotel Collection in Dubai positions itself as preferred destination for Jewish travelers

Since the signing of the Abraham Accords in August 2020, which led to the  normalization of relations between the United Arab Emirates and Israel, more than a half million Israelis have travelled to the UAE to discover what the Gulf country has to offer.

Wherever you walk in Dubai, whether in a restaurant, Burj Khalifa, the world’s tallest building, at the inspiring Museum of the Future, or in the souks, one of the most spoken language you hear among tourists is definitely Hebrew.

Since the signing of the Abraham Accords in August 2020, which led to the  normalization of relations between the United Arab Emirates and Israel, more than a half million Israelis have travelled to the UAE to discover what the Gulf country has to offer, including during Expo Dubai which closed end of March. Several airlines, including Emirates, are flying from Tel Aviv to Dubai with more than ten daily flights between the two cities. This is also true for Jewish visitors from around the world who have chosen Dubai either for professional reasons or for their family holidays. Dubai’s attraction among the Jewish world has also led to a growth of the local Jewish community along with the services needed in daily life.

Among the myriad of Dubai’s luxurious hotels, the Al Habtoor City Hotel Collection, which comprises 3 distinct hotels in one stellar destination, the Hilton Dubai Al Habtoor City, the V Hotel Dubai, Curio Collection by Hilton and the Habtoor Palace Dubai, LXR Hotels & Resorts, was the very first destination in Dubai to initiate Kosher catering services, well ahead of the Abraham Accords, thanks to the vision of the Al Habtoor Group led by its Founder and Chairman Khalaf Ahmad Al Habtoor who has been a proponent of normalization with Israel even before the Abraham Accords and who wanted his hotels to be able to cater to the specific niche of Israeli-Jewish clientèle. This year, the Holy month of Ramadan, which ended last month, happened at the same time as Pessach, the Jewish Passover holiday, which saw a surge of visitors both from Israel  and the Muslim world.

The Al Habtoor Group : one of the UAE’s  most respected and successful businesses

The Al Habtoor Group has grown with the United Arab Emirates. What started out as a small engineering firm in 1970, is today one of the region’s most respected conglomerates with interests in the hospitality, automotive, real estate, education and publishing sectors. It has earned itself a solid reputation both locally and internationally.

Today it operates in the UAE and international markets, employing thousands of highly-qualified, experienced professionals. Just as the name of the UAE has become synonymous with trade and enterprise all over the world, the name of the Al Habtoor Group has become synonymous with dynamic growth, evidenced by its commitment to develop and grow businesses in multiple sectors.

It proudly waves the United Arab Emirates flag in many cities around the globe including London, Vienna, Budapest, Beirut and Springfield, Illinois.

The Al Habtoor’s vision is clearly  to position their hotels as the preferred destination in Dubai and the region for Jewish travelers. The Group’s hospitality division includes 14 world-class hotels: seven locally and seven abroad.

The three hotels of the Al Habtoor City Collection are centrally located in the heart of the new Dubai, only 20 minutes drive to the airport, 20 minutes to go to Jumeirah area with its beaches, 15 min to Dubai Mall, the biggest in the world, and Burj Khalifa, 10 min tot he Museum of the Future. This new Dubai envisioned by UAE’s leader Sheikh Mohammed Bin Zayed.

The Habtoor family was part of this envision and created Habtoor City which is aiming to become Dubai’s biggest lifestyle and entertainment scenery with the three hotels, more than 20 restaurants offering culinary from various Middle Eastern and other countries in the world as well as the La Perle aqua theatre presenting a show designed by producer Franco Dragone.

Within the distinctive triptych of Al Habtoor City Hotel Collection, the Habtoor Palace is an hotel with an immense character, reminiscent of a  Maison de Maître combining French neoclassical architectural style and British heritage. Almost like you are traveling to the house of the Habtoors, browsing with them through their favorite global landmarks, a New-York style steakhouse at World Cut, a fancy brasserie on Avenue des Champs Elysees at BQ restaurant, a Parisian Palace open-air atrium at Le Patio…

A place to see and to be seen, Habtoor Palace is a masterpiece of architecture and interior design filled with historic memorabilia and significant art pieces, its amazing inviting lobby which purportedly doesn’t include the common reception desk, its Polo Bar as well as Churchill and Bentley suites….

From which countries are most of guests coming through the year ?

Al Habtoor City Hotel Collection enjoys two resounding namesakes – the Hilton hospitality flagship with its international network and evocative brand name, combined with the Al Habtoor family heritage, which enjoys exceptional authority and recognition in the region and the Arab world. This complementary legacy offers us a unique positioning as a “glocal” destination, with the likes of other truly authentic names such as Burj Al Arab, Burj Khalifa etc.

The same appeal reflects in our psychographics: Hilton’s clientele is very international, covering Americas, Europe, and Asia. V Hotel Dubai is the preferred destination for young, ambitious entrepreneurs, creative industry events and showcases – fashion, media awards, celebrity gala nights – whether from UAE or the region. Habtoor Palace Dubai has a very strong aura on the Gulf Cooperation Council (GCC) region, and therefore indirectly on major international tourism travelers along with international delegations and royalties looking to make connections with key personalities of the UAE and beyond in an undiscovered Palace that is the place to see and be seen for those in-the-know. 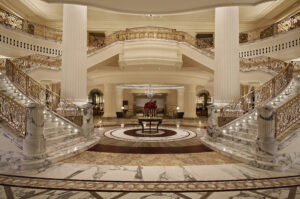 The Habtoor Palace, an hotel with great character, reminiscent of a Maison de Maître with both French neoclassical architectural style and British heritage.

What is the Jewish/Israeli angle of the Habtoor group hotels ?

Al Habtoor City Hotel Collection is blessed to have wonderful owners, who are well-traveled and connoisseurs and amateurs of cultures, voyage and the fine enjoyments in life. The fact that our collection of hotels holds their name is a pure testimony of this heartfelt aspiration. Naturally, it reflects into their visionary leadership and inspires our mission as global Hoteliers. The proof holds true as Al Habtoor City Hotel Collection has been the very first destination in Dubai to initiate Kosher catering services, first via third party partnership well ahead of the Abraham Accords. This historical milestone has reinforced our convictions, and we then immediately proceeded with our Kosher Kitchen certification under our own management, with the blessing from Rabbi Levi Duchman, allowing us to operate daily Kosher breakfast for the complex, along with other special catering services for both individual and group guests inquiries.

During Expo 2020, we had the privilege of hosting many personalities from the Jewish world, many of whom elected Al Habtoor City as their preferred destination for long stay during the full 6-month of the exhibition. We are now planning a initiation visit to Israel in presence of our senior leadership, since our recent history and realistic ambitions place Israel as a top 3 feeder market, with the likes of UAE or Saudi Arabia. This ambition also aims at supporting our efforts and positioning as the preferred destination in Dubai and the region for Kosher observant and Jewish travelers from around the world. 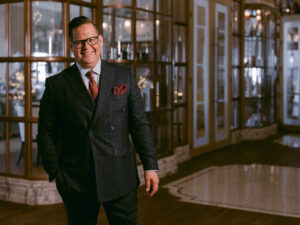 Since when are Jewish/Israeli tourists coming to your hotels ?

Hilton has been appointed to manage the operations for Al Habtoor City Hotel Collection after a brand conversion process from another hotel operator, therefore we unfortunately may not track enough accurate data past a certain time period. From what we could monitor, the Abraham Accords have been a major catalyst in the upbringing of Jewish/Israeli tourists to the hotels in Dubai. Our Kosher certification has certainly contributed to this success afterwards, followed by Expo 2020.

We believe this narrative is a story that is still to be written and that is why we pursue our efforts working with representation agencies in Israel, and key figures of the Jewish world in Italy, Benelux, France, United Kingdom and North America.

Any specific time of the year ?

The location is truly enchanteresque and provides a unique sentiment of discovering a location reserved for Connoisseurs only. While staying at Habtoor Palace, guests can still enjoy the wonders provided by the combined 3 hotels – 3 rooftop pools, a separate kids club and pool, more than 30 entertainment and gastronomic venues, including 2 Spas and Dubai number one show – La Perle by Franco Dragone. This reinforces our positioning as a destination within the destination, where guests could still enjoy a truly grand Dubai sojourn all under one and the same roof, even during the hot summer season.