You are at:Home»Western Europe»Vatican criticises right-wing Italian parties for abstaining in vote to set up parliament commission to investigate antisemitism

“I am worried, in the sense that on some things like fundamental values we should all be united”, Vatican Secretary of State Cardinal Pietro Parolin told journalists after the the Lega (League), the Brothers of Italy and former Italian Prime Minister Silvio Berlusconi’s Forza Italia abstained on the vote for the creation of the commission last week.

The right-wing parties explained their abstention by saying that the motion for the commission was ambiguous, in the sense in which it cited nationalism and ethnocentricity as driving forces behind racial hatred.

“There is a danger that all this gets politicised. We need to break clear of this”, the cardinal said.

Holocaust survivor and life Senator Liliana Segre had proposed the creation of the commission after revealing that she receives an average of 200 hate messages a day on social media.

The ruling 5-Star Movement and center-left Democratic Party (PD) both backed the commission, which will go ahead despite the rightist abstentions.

“The abstention of some parties is a bit dismaying. It’s a decision that we consider wrong and dangerous”, declared Ruth Dureghello, president of the Jewish community of Rome.

“This abstention seems to legitimize a culture of hatred that is reflected in society. It is a shameful page in our political life”, said 5-Star deputy Elisa Tripodi.

Some members of Forza Italia criticised the  party’s abstention in the vote, lamenting that the group seemed to only want to keep up with the most extreme elements in Italian politics.

“We are betraying our values and changing our skin”, decried Forza Italia MP Mara Carfagna.

Noemi Di Segni, president of UCEI, the Union of Jewish communities in Italy,  praised the creation of the commission. ‘’The Senate has given an important signal to the whole Italian society. In an age characterized by the growing affirmation of hatred and sick words, pervasive in every aspect of our real and virtual life, it is in fact necessary that the institutions intervene with the maximum incisiveness, strength and authority,’’ she said.

She added: ‘’Those who abstained are not exempted from the duty to participate in this commitment. The choice of abstention by some parties remains incomprehensible and irresponsible.’’

Who is Liliana Segre who was behind the creation of the commission ?

A Holocaust survivor, Liliana Segre was made a Senator for life by the country’s president Sergio Mattarella last year to mark 80 years in 2018 since Italy’s Fascist government introduced racial laws discriminating against Jews.

Aged just eight at the time, Segre was expelled from her school after these laws came into effect and five years later she and most of her family were arrested after trying to flee to Switzerland. 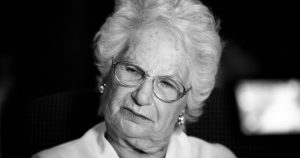 She was deported to Auschwitz and was one of only 25 Italian child survivors of the 776 who were sent to that camp.

For several decades after her liberation, Segre chose not to speak publicly about what she had experienced, but in the ’90s she began to tell her story at schools and conferences. Since then, her testimony has been featured in multiple documentaries and books about the Holocaust.