You are at:Home»Eastern Europe»Ukraine has applied to join the International Holocaust Remembrance Alliance’s task force on Holocaust education

The announcement was made  Monday during the opening of the Jewish Forum conference in Kiev.

The  Kyiv Jewish Forum, organized by the Jewish Confederation of Ukraine, is a two-day event aimed at promoting deeper ties between the Ukrainian Jewish population and world Jewry and offering a platform for galvanizing European efforts in the fight against antisemitism.

“The application is not just about politics, it’s about discussing history fairly and honestly,”  Klimkin said during his announcement.

The “absence of anti-Semitic rhetoric during the campaign is a miracle, a stunning fact that shows how far Ukraine has come,” Elan Carr, the US Special Envoy to Monitor and Combat Anti-Semitism, said at the conference. He said he would serve as a “champion of Ukraine,” partly for that reason. 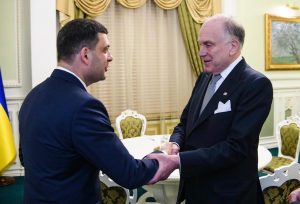 On the sidelines of the Kyiv forum, WJC President Ronald Lauder (R) met privately with the Ukrainian Prime Minister Volodymyr Groysman, who is Jewish.

In accepting the honor, Lauder underscored the fact that “Jews should be able to live in peace without fear,” and dedicated the award to “all of the people around world who stand up and speak out again antisemitism and injustice.”

In his address to the forum, WJC President Lauder praised the government of Ukraine for its efforts to support the local Jewish community and for maintaining relatively low levels of antisemitism. “While the history of antisemitism in Ukraine can never be erased, I see the Ukrainian Christian community and the Ukrainian Jewish community moving forward together.” Lauder also stressed the need for unity among the Jewish people, saying: “We have many differences, left-right, religious-secular, but we face big challenges and we need to work together.”

On the sidelines of the forum, Lauder and WJC CEO Singer met privately with the Ukrainian Prime Minister ‘’for productive talks about the Ukrainian Jewish community and Ukraine’s bilateral relationship with Israel,’’ the WJC said.