You are at:Home»Western Europe»One of the last trials of a former Nazi guard

‘’This is perhaps one of the last trials to be held of a former Nazi guard and we are grateful that the court has reached a decision on this matter while the criminal is still alive to serve his time, albeit decades late,” commented the World Jewish Congress after a court in Germany convicted 93-year-old former Nazi guard Bruno Dey of 5,232 counts of accessory to murder at the Stutthof concentration camp near the Polish city of Gdansk in 1944-45.

“After more than seven decades, a small slice of justice has been served to the victims of Stutthof and their descendants,” said World Jewish Congress President Ronald S. Lauder.

“Over 60,000 Jews were slaughtered by the Nazis at Stutthof, the last of the concentration camps to be liberated by the Allies at the end of the war. The murderers who so callously and mercilessly stole the lives of innocent Jewish men, women, and children were free to live their own lives after the war, without retribution or punishment for their crimes. Today, the Hamburg Juvenile Court has ruled that the heinous inhumanity shown by Bruno Dey as a Nazi guard so many decades ago will not be allowed to go unpunished,’’ he added.

Some of the victims were executed, others died of illness. Some 40 survivors and relatives of those who died acted as co-plaintiffs in the case, and many of them testified in court during the nine-month trial.

The judge acknowledged the former SS guard’s willingness to take part in the trial and listen to the testimony of victims, but said he refused to recognize his own guilt right until the end. “You saw yourself as an observer,” she said.

Judge Anne Meier-Göring also flatly contradicted Bruno D.’s claim, made in his final statement, that he would not have stayed at Stutthof if he had seen a way out. “That is not true,” she said. “You didn’t look for a way out.”

The judge similarly rejected claims that Bruno Dey did not know what people in the camp were dying of, and that he was not aware of the cruelty and executions, though he did on one occasion admit he heard screams from a gas chamber. “Of course you knew what the people died of. They died of the human hell of Stutthof,” she said. 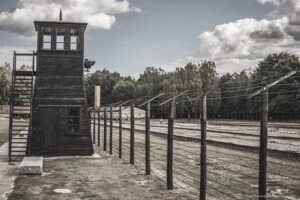 The Stutthof concentration camp near the Polish city of Gdansk.

The nine-month trial was held in a young offenders’ court since Bruno D. was only 17 when he began his yearlong service as guard at the Stutthof concentration camp in August 1944.

But the 76 intervening years were not legally relevant. There is no statute of limitations on murder in Germany, and being a guard at a concentration camp is sufficient for prosecution, thanks to a precedent set in the case of John Demjanjuk in 2011.