Chanukah is the Jewish festival of lights during which candles are lighted during eight days in memory of the rededication of the Temple in Jerusalem in the 2nd century BCE. independence.

According to the legend,  a miracle happened in the temple and a small urn of olive oil to light the menorah lasted for eight days.

Earlier this month, an annual Chanukah reception was held in the Berlaymont, the headquarters of the European Commission, at the initiative of the Europeran Jewish Commununity Centre. 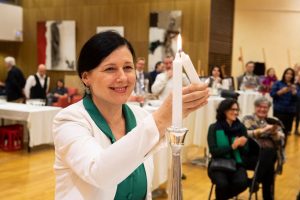 European Commission Vice-President Vera Jourova lights a Chanukah candle during an event earlier this month in the Berlaymont, the EU Commission seat.

During the event, European Commission Vice-President Vera Jourova, who is in charge of  for Values and Equality, lit a candle in honour of the 71st anniversary of the United Nations Universal Declaration of Human Rights.