Breaking
You are at:Home»Israel»How can a Jerusalem auction house offer for sale needle systems used by the Nazis to tattoo numbers on arms of Jewish prisoners at Auschwitz ?

How can an auction house in Jerusalem present for sale not only Jewish religious items, which is normal, but also needle systems used by the Nazis during WWII to tattoo numbers on the arms of Jewish prisoners at the Auschwitz extermination camp ?

How can it be that the world is about to mark the anniversary of Kristallnacht, the  Night of Broken Glass, the anti-Jewish pogtrom in Germany and Austria that is one of the seminal moments that led to the Holocaust, while Tzolman’s Auction is looking to profit from the sale of stamps used by Nazis?, asked Rabbi Menachem Margolin, chairman of the European Jewish Association (EJA), a group that is advocating a ban of the sale of Nazi memorabilia at auctions and on websites for private individuals or entities not directly involved in educational facilities such as Universities or Museums.

Margolin wrote a letter to Israeli Justice Minister Gideon Sa’ar, urging him to put an end to the “despicable sale.”

“I appeal to you personally to do everything in your power to prevent the humiliation of the victims and the sale of stamps that were used to burn the arms of millions of European Jews,” he wrote. “The trade of such sensitive items cannot be allowed.”

Rabbi Margolin noted that his organization will lead a delegation of around 150 personalities from around – including ministers and lawmakers – to Auschwitz precisely on 8 and 9 November, the dates of the Kristallnacht in 1938. ”We will again push for a ban of the sale of Nazi items,” he said. 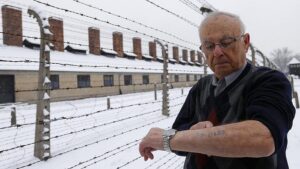 Dani Dayan, Chairman of Yad Vashem, the World Holocaust Memorial, said: “The place of historical items from the Holocaust period is in the Yad Vashem collection. Here they are preserved, researched and serve as historical testimony to scholars and the general public.

He noted that Yad Vashem opposed the trade of such items both because it was “morally wrong” and because it encouraged further sale and even counterfeit of Nazi memorabilia.

Tzolman’s Auction said in a statement that it “has been working for many years to sell Judaica and collectibles in order to preserve the heritage of Israel and Judaism. The same is true of items that survived the terrible inferno. The items in question garnered great interest and extensive public discourse and preserve the memory of the Holocaust.”

The Jerusalem auction house further said that it was trying to sell the items to an individual who would then donate them to a Holocaust museum. It also pointed out that the media was outraged because the auction house made the sale public.