BRUSSELS—Vandals have damaged a Holocaust memorial in the Belgian city of Ghent, located some 50 km west of Brussels. It happened on the eve of the Kristallnacht (‘’Night of Broken Glass’’) commemoration.

The so-called Michaël Lustig monument, in the shape of a dreidl, is located at the confluence of a major canal. The monument, consisting of a marble floor with a copper toll, was installed in 1998. The artwork bears the names of the Jews in Ghent who were deported to Nazi camps during World War II. 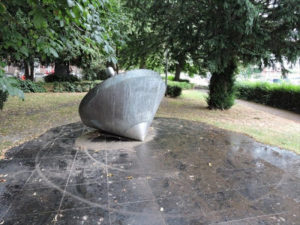 The Jewish community of Ghent was founded at the end of the 19th century  and grew between WWI and WWII.

Today only a small number of Jews live in the city.