You are at:Home»Western Europe»Heavily armed assailant tried unsuccessfully to attack a synagogue in Germany on Yom Kippur

A heavily armed assailant with a live-streaming head camera tried unsuccessfully to attack the synagogue during Yom Kippur services, then killed two people outside and wounded two others in what the government called an anti-Semitic assault.

BERLIN— “The act of Halle on the highest Jewish holiday Yom Kippur has deeply distressed and frightened our community,’’ said Josef Schuster, President of the Central Council of Jews in Germany, in a reaction following Wednesday’s fatal attack by a heavily-armed man outside a synagogue in the east German city of Halle.

A heavily armed assailant with a live-streaming head camera tried unsuccessfully to invade and attack the synagogue during Yom Kippur services, then killed two people outside and wounded two others in what the government called an anti-Semitic assault.

Local police have confirmed that two people were killed and several shots fired. One suspect has been apprehended so far. Approximately 80 worshippers were in the synagogue at the time of the attack, which was carried out by a man in military fatigues and heavily armed, reportedly shouting “ the root of all problems is the Jews”, who filmed the entire attack from a camera on his helmet and then went on to fire shots in a near-by Turkish restaurant.

The synagogue was not guarded by local police. The perpetrator also tried to invade the neighboring Jewish cemetery.

Schuster said: ‘’The brutality of the attack surpasses anything that has happened in recent years and is a profound shock to all Jews in Germany. The fact that the synagogue in Halle was not protected by the police on a holiday like Yom Kippur is scandalous. This negligence has now avenged itself bitterly. Miraculously, not more evil has happened. ”

In a statement, the World Jewish Congress (WJC) said it is ‘’horrified’’ by the attack.  WJC President Ronald S. Lauder reacted by saying: “It is appalling that on this day — the holiest in the Jewish calendar — when Jews are sitting in synagogues all around the world immersed in prayer, yet another attack against Jews has been perpetrated. Only this morning, German Federal President Frank-Walter Steinmeier spoke of his concern for ‘Jews being offended and attacked in his country’,” referring to the Federal President’s speech in Leipzig on the 30th anniversary of the pivotal Peaceful Revolution demonstration there.

“We are heartened that the German security services reacted so swiftly to this attack, and thank Dr. Felix Klein, Commissioner for Jewish Life in Germany and the Fight Against Antisemitism, and the German authorities for their ongoing support, but now we need action not words,’’ Lauder added.

‘’Unfortunately the time has come when all Jewish places of worship and Jewish communal sites need to have enhanced round-the-clock security provided by state security services. We also need immediately to launch a unified front against neo-Nazi and other extremist groups, which threaten our well-being. The fact that, 75 years after the Holocaust, such groups are gaining influence in Germany speaks volumes. We stand with the Jewish community of Germany at this tragic time.”

Livestreaming site Twitch said that a video of the deadly shooting attack  was broadcast live on its platform by the suspected killer.

Twitch said in a statement it had “worked with urgency” to remove the content after the attack.

The 35-minute long video showed the attacker’s ammunition and saying in English that the “root of all problems are the Jews.”

In the video, the gunman is heard making far-right talking points and can be seen driving to the synagogue.

The Halle attack appears to be the latest in a wave of attacks against Jews to rock Germany in recent years. Germany’s domestic intelligence agency reported last month that the number of anti-Semitic acts of violence rose sharply last year alongside a further increase in those identified as far-right extremists.

In a statement, Israeli-Jewish Congress (IJC) President Vladimir Sloutsker, declared : “In the wake of this latest vicious rise of Jew hatred in Germany, including violent attacks of terror, we say enough empty condemnations and message of solidarity. It is time for real, immediate and tangible action. The Jewish community, as citizens of Europe, must be protected and have the basic right to practise and live in freedom and  peace.”

Moshe Kantor, President of the European Jewish Congress, said: “We are relieved that an even greater tragedy was avoided because of the security around the synagogue which apparently took measures to ensure that the attacker was not able to enter into the premises.’’

He added: “However, that Jews observing one of the holiest days of the year were targeted for death should send shock waves in Germany and beyond.”

Kantor stressed that ‘’we need to do more to guarantee these types of attacks do not happen again, by combatting radicalisation, creating tougher law enforcement measures and putting more resources into educating towards tolerance.”

Gideon Falter, Chief Executive of Campaign Against Antisemitism in Briatin, said: “All over the world, far-right, far-left and Islamist fanatics are stoking the flames of Jew-hatred with too little being done to stop them. In Britain Jews are already accustomed to worshipping in fortified synagogues surrounded by blast walls and security guards. Those who enable or fail to act against this resurgent hatred are complicit in the rising toll from antisemitic terrorist attacks around the world. 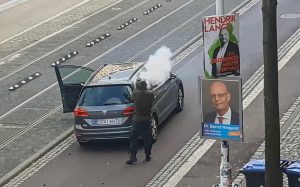 A heavily armed assailant with a live-streaming head camera tried unsuccessfully to attack the synagogue in Halle during Yom Kippur services, then killed two people outside and wounded two others in what the government called an anti-Semitic assault.

As Yom Kippur came to an end, Israel’s leaders reacted to the attack. “The terror attack against the community in Halle, Germany, on Yom Kippur, the holiest day for our people, is another expression of the rising anti-Semitism in Europe,” said Israeli Prime Minister Benjamin Netanyahu.

“I call on the German authorities to continue to act determinedly against the phenomenon of anti-Semitism,” he added.

President Reuven Rivlin said he was “stunned and pained by the terrible anti-Semitic murders in Germany” that were committed during the holiest and most important day of the year for all Jews around the world.

He also called on German leaders and the entire free world to bring the full force of law against anti-Semitism and its results.

“We will continue to campaign for education and remembrance in the fight against anti-Semitism which raises its head again and again in Europe and across the world, based on the clear understanding that it is not a problem of the Jews alone, but threatens to destroy us all,” Rivlin said.