You are at:Home»USA»Following new violent antisemitic attack in New York, Jewish groups call for real measures against surge of attacks

“We will not allow this to become the new normal. We’ll use every tool we have to stop these attacks once and for all,” said New York Mayor Bill De Blasio said. “The NYPD has deployed a visible and growing presence around Jewish houses of worship on the streets in communities like Williamsburg, Crown Heights and Boro Park,” he tweeted.

NEW YORK—American Jewish groups reacted with horror and anger to the news on Saturday night of a violent stabbing attack on Jews durin a Chanukah candle-lighting that left five people injured at the home of a rabbi in Monsey, New York.

According to reports, the attacker, a black male,  who has later been arrested, carried a long machette as he entered the home of Rabbi Chaim Rottenburg, slashing people before fleeing.

According to eyewitnesses, the man’s face was covered by a scarf as he slashed and stabbed at ultra-Orthodox attendees at the intimate gathering, who threw chairs and tables at him and whisked children away to safety.

After the attacker fled the home, he attempted to break into a neighboring synagogue, but found the doors locked after worshippers barred themselves inside.

Four of the five victims have reportedly already been identified, and at least two are reported to be in critical condition. Three of the victims are reportedly members of the family of the rabbi in whose home the attack occurred: Chaim, Meir, and Shlomo Rottenburg, and the fourth is Rabbi Yosef Neiman.

New York police announced that they had apprehended the stabbing suspect, after his getaway car’s license plate number was reported by eyewitnesses. He was identified as Grafton E. Thomas. He was captured in Harlem, near W. 144th Street and Adam Clayton Powell Jr. Boulevard in New York City.

According to media rerports, Thomas was arrested with “blood all over him.”

Thomas was charged with five counts of attempted murder and one count of burglary.

New York Governor Andrew Cuomo declared in a statement: “I am horrified by the stabbing of multiple people at a synagogue.” “We have zero tolerance for anti-Semitism in New York and we will hold the attacker accountable to the fullest extent of the law,” he said.

“We will not allow this to become the new normal. We’ll use every tool we have to stop these attacks once and for all,” said New York Mayor Bill De Blasio said. “The NYPD has deployed a visible and growing presence around Jewish houses of worship on the streets in communities like Williamsburg, Crown Heights and Boro Park,” he tweeted.

At least five additional anti-Semitic attacks have been reported across New York City and Brooklyn since the beginning of Chanukah, including a brutal assault on a 65-year-old man, an attack on 2 Jewish children, harassment against a Jewish man by a gang, a violent assault against a man by a gang, and an attack on a Jewish male by a lone attacker.

The Conference of Presidents of Major American Jewish Organizations, the leading Jewish umbrella group in the US, voiced “outrage” at the Monsey attack. It called for “real measures by law enforcement, governmental leaders, and judicial authorities at the city, state, and federal levels.’’ ‘’There must be serious consequences for perpetrators,” it said, calling on leaders of “religious, ethnic and other communities” to speak out.

The Anti-Defamation League said it was “horrified” by the attack, and referred to multiple other assaults on Jews in New York over the past week. The group called for law enforcement to take greater steps to secure the Jewish community.

“After the hateful assaults we saw this past week in Brooklyn and Manhattan, it is heart-wrenching to see the holiday of Hanukkah violated yet again,” said ADL CEO Jonathan Greenblatt. “We are outraged because the answer is clear: the Jewish community NEEDS greater protection. Whether worshiping in synagogue, shopping in the supermarket or celebrating at home, Jews should be safe from violence. We need authorities to provide increased protection NOW and ensure that the full force of the law is brought down on those who perpetrate such horrific crimes.”

The Simon Wiesenthal Center (SWC) urged President Donald Trump to “instruct the FBI to create a special task force in the wake of unending attacks against Jews and their religious institutions.” 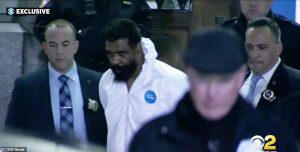 New York police announced that they had apprehended the stabbing suspect, after his getaway car’s license plate number was reported by eyewitnesses. He was identified as Grafton E. Thomas.

“Enough is enough!” said Rabbi Marvin Hier and Abraham Cooper, leaders of the SWC. “Jews should not have to fear for their lives in America to go to their houses of worship. The FBI must step up and take the lead in all recent violent hate crimes targeting religious Jews,” they said.

The American Jewish Committee condemned the attack. “What we need is a sustained, get-tough, zero-tolerance policy by local and state officials. And that policy must take equally seriously each incident, whatever its source might be. Antisemitism is antisemitism,” said the group’s CEO, David Harris.

“This surge in attacks must also be seen in the larger context of rising antisemitism around the world, including elsewhere in our country and in significant parts of Europe,” he added. “That calls for greater cooperation in the sharing of information and best practices in combating this age-old hatred.”

“We cannot, must not, allow ourselves to become numb to the meaning of these repeated attacks. We cannot let them become the new normal,” Harris concluded.

Israeli Prime Minister Benjamin Netanyahu ”strongly” condemned ”the latest expressions of anti-Semitism and the cruel attack in the middle of Hanukkah at the home of the rabbi,” at the weekly cabinet meeting.

“We send wishes for recovery to those injured. We will cooperate in any way with local authorities to help wipe out this phenomenon. We offer this help to all countries.”

In more deadly recent antisemitic attacks, a gunman killed a woman and wounded three people during services at Congregation Chabad in Poway, near San Diego, on the last day of Passover in April 2019.

Earlier this month, three were killed in a shooting attack at a kosher supermarket in Jersey City. The killer had posted antisemitic and anti-police messages online.

Six months before that, a gunman killed 11 worshipers at the Tree of Life synagogue in Pittsburgh in the deadliest antisemitic attack in US history.