TEL AVIV—A group of 26 journalists from several European countries had the privilege this week to witness the preparations of the 2019 Eurovision Song Contest that will take place May 14-18 in Tel Aviv.

The Song Contest, which is viewed by some 200 million viewers around the globe,  will be held for the 64th time and for the first time in the city of Tel Aviv with the participation of 41 countries under the slogan ‘’Dare To Dream.’’ The Song Contest will be produced and broadcast live by KAN, the Israeli Public Broadasting Corporation, for the European Broadcasting Union (EBU).

An additional highlight will be the presence of Madonna who will perform at the May 18 final, it was announced this week.

During the 5-day press trip organised by Europe Israel Press Association (EIPA), a Brussels-based group, the journalists, some of whom will cover the May event along with around 1500 colleagues from 80 countries, met the Song Contest producers, presenters, visited the event venue and experienced Israel’s musical scene by encountering several artists who reflect the melting pot of a pluralistic society that was shaped after decades of immigration from east and west.

‘’It is the first time that I had the opportunity to come to the venue before the contest and see its context,’’ Lammert de Bruin, a Dutch journalist for public broadcaster  NPO Radio 1 and AVROTROS, who covers the Eurovision since several years, told European Jewish Press.

‘’This is a unique opportunity for the city of Tel Aviv and it will be an unprecedented mega show with various  side events and venues, like Euro Village on the beachfront, Euro Café and others,’’ Eytan Schwartz, CEO of Tel Aviv Global & Tourism Mayor’s Office, told the journalists. This will be a big boost for tourism in the city and globally Israel. Last year tourism to Israel broke a new record with the country welcoming some four million tourists, an increase of 13 % compared to 2017. 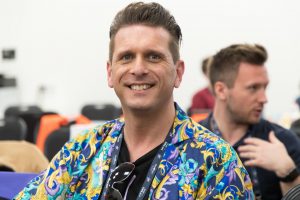 Lammert de Bruin, Dutch journalist from the public broadcaster NPO and AVROTROS: ‘’It is the first time that I had the opportunity to come to the venue before the contest and see its context.”

The 2019 Eurovision Song Contest will take place at the Expo Tel Aviv International Convention  Center, the largest and most advanced conference and events center in Israel, located north of the city, above Yarkon Park.  It consists of a total of 8 pavilions and 20 meeting halls, the compound has 25,000 square meters of roofed exhibition grounds in total, with the biggest pavilion hosting up to 7,000 people.

As explained by Tamir Dayan, CEO of Tel Aviv Expo, the venue has a wealth of experience hosting a wide variety of concerts , exhibitions and stage performances of international magnitude. ‘’But this will be a first for Expo Tel Aviv to be hosting one of the scale, scope and size of the European Song Contest,’’ he told the journalists who entered the venue  after passing through tight security check. Security and transportation will be among the main organizers’s challenges.  Around 80,000 people are expected to walk through the ground during the Eurovision Song Contest with two semi-finals on 14 and 16 May and the big final on the 18th of May.

The 2019 Eurovision song contest will see new tools and features that will turn it from a popular television show into an unprecedented digital experience with online games and apps which will immerse the audience to the songs of the 41 participating countries. 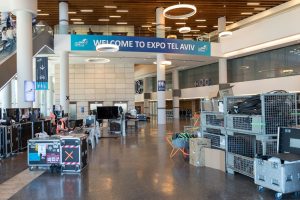 Inside Pavilion 2 of Expo Tel Aviv, where one can feel the heat of technical and scenic preparations, Lucy Ayoub, one of the four presenters of the Song Contest, said how much she was proud to have been chosen with her colleagues. ‘’We will start rehearsals next week and I am preparing to address the show in several languages,’’ she said. The 26-year-old Israeli television KAN presenter and writer, will host the ‘’Green Room’’, the 41 artists’ backstage Eurovision Song Contest, alongside supermodel Bar Rafaeli, Assi Azar and Erez Tal. Lucy Ayoub, who was born in Haifa, is a daughter to an Arab Christian father and an Ashkenazi Jewish mother. Her maternal grandparents were Holocaust survivors.

Total budget for the Eurovision Song Contest is expected to reach 28.5 million euros. The Israeli Public Broadcaster KAN has decided to take a 70 million ILS (around 16.5 million) government-loan, to secure this budget.  It estimates a revenue of 50 million ILS (€12 million) from tickets and sponsorships. The City of Tel-Aviv, dubbed the ”non-stop city”,  is funding some of the expenses, including the cost of the major venue and cost for the Eurovision Village.

”Much attention is being paid to the logistics of the event. With 10,000 tourists expected, who will fill all of the city’s hotel rooms, the city wants to impress them with European level transportation and logistics,” said Eitan Schwartz.

There will be 500  volunteers located throughout the city offering pocket guides, as well as a new city website, fixed prices at the beach, free buses on Shabbat so that tourists don’t have rely on cabs, regularly cleaned beaches, and many free tours. ”We want the tourists to fall in love with Israel,” said Yigal Ravid, a previous presenter of the Eurovision. 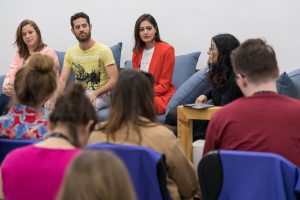 Lucy Ayoub (in red), who will be one of the presenters of the 2019 Eurovision Song Contest, speaks to the journalists at Expo Tel Aviv, the venue of the contest.When KAN was established,  it was decided by law that the government couldn’t make any major changes in it’s yearly budget, to avoid any financial connection and  dependence between the broadcaster and politicians inside the government.

Israel made its debut in the Eurovision Song Contest in 1973 and it was the first non-European country that was granted permission to participate in the event.

Israel showed strong interest in the competition from the very beginning and it paid off very soon, as they managed to win for the first time, in Paris in 1978, with the song A-Ba-Ni-Bi performed by Izhar Cohen (whom the European journalists met this week). The Eurovision Song Contest travelled to Jerusalem in 1979 where Israel won the competition for the second time in a row with Milk and Honey‘s Hallelujah song, which became another international hit. 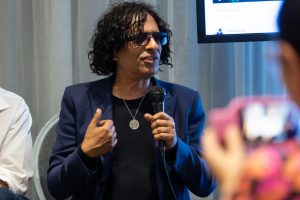 Dana International made headlines around the world in 1998 when she became the first transgender singer to win the Eurovision Song Contest. The competition returned to Jerusalem in 1999.

In 2018 in Lisbon, Israel won the Eurovision Song Contest for the fourth time, with Netta Barzilai receiving 529 points for her empowering anthem TOY.

The press trip was also the occasion for the 26 journalists from Sweden, Germany, Itraly, the UK, the Netherlands, France, Spain, Belgium, Ireland, Denmark and the U.S., to discover the Israeli musical scene. 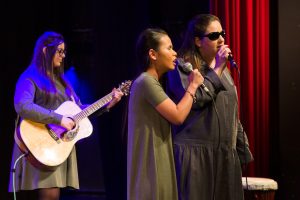 The Shalva Band performs for the European journalists.

They visited the Rimon School of Music where they met artists such as Ester Rada, a singer of Ethipian origin, and where they a glimpse of the jazz, hip hop and ethnic music scenes. Kobi Merimi, Israel’s representative to the 2019 Eurovision, expressed his hopes for the contest. And Idan Raichel, a global music icon who has brought his inspiring example and soul-stirring music to some of the world’s biggest stages, and collaborated with famous artists around the world, performed for the journalists in his studio near Tel Aviv.

In Jerusalem, on the day of the elections which saw Israeli Prime Minister Benjamin Netanyahu re-elected for a fifth term, the journalists had a moving meeting with the Shalva Band, made up of 8 talented musicians with wit disabilities. The band, which participated in the ‘’Rising Star’’,Israel’s preliminary contest to this year’s Eurovision Song Contest, made it to the semi-finals but decided to forfeit the coemption due to some of its members’s not wanting to rehearsal and perform on Shabbat, the Jewish day of rest.

The Shalva Band, Idan Raichel as well as Izhar Cohen, and Dana International, another past Israeli Eurovision winner, will all perform during the semi-finals and final.

‘’This is the best trip I ever experienced. We have met great people and learned a lot about Israel,’’ said Davide Re from RAI, Italy’s public tv broadcaster.