Breaking
You are at:Home»Western Europe»Activists from across Europe gather in Rome for seminar to prepare campaigns on Judaism, fight against antisemitism and in support of Israel

Some forty young activists from across Europe took part in a seminar in Rome aimed at preparing them for future political and cultural campaigns in support of Judaism, the fight against anti-Semitism and the state of Israel.

The two-day gathering at the Jewish center of Monteverde Vecchio Beit Michael Synagogue was organized by the European Jewish Association (EJA) in collaboration with the Europe Israel Public Affairs and the European Center for Jewish Students. It is the third such that such an event is organized.

The seminar featured university professors and leaders of Jewish organizations and institutions as well as Italy’s national coordinator on combatting anti-Semitism, Professor Milena Santerini, a former member of the parliament. 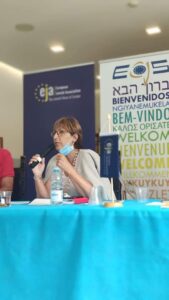 EJA Director Alex Benjamin, said he was very satisfied with the participation and success of the event. ”Despite the serious situation due to Covid-19, it has seen a very intense discussion on the age-old virus of anti-Semitism”.

Among those who attended the conference was also Michael Freilich, an Orthodox Jew who sits in the Belgian Parliament.