To celebrate the second anniversary of the Abraham Accords, Ambassadors to Belgium of the various signatory countries, the United Arab Emirates, Israel, the United States, Bahrein and Morocco, stand together in the Belgian parliament in Brussels on Tuesday as they hailed the ‘’historic’’ accords which opened a new chapter of peace and prosperity for the region and beyond.

Two years ago, on 15 September 2020, the Abraham Accords between Israel and several Arab nations were signed on the White House lawn in Washington D.C., marking a real turning point in the Middle East.

To celebrate this second anniversary, Ambassadors to Belgium of the various signatory countries, the United Arab Emirates, Israel, the United States, Bahrein and Morocco, stand together in the Belgian parliament in Brussels on Tuesday as they hailed the ‘’historic’’ Abraham Accords which opened a new chapter of peace and prosperity for the region and beyond. Hungary’s ambassador was also present as his country was the sole EU member state to be  represented at the signing ceremony in Washington.

Each ambassador spoke about the Abraham Accords during a conference initiated and hosted by Belgian MP Michael Freilich and Senator Karl Van Louwe.

‘’The Abraham Accords can act as a positive catalyst for us in Europe as well. I hope that the EU and Belgium will play an active role in promoting these accords,’’ said Freilich who deplored that ‘’unfortunately Europe is standing on the sidelines.’’  He called on the Europeans ‘’to fully embrace the accords.’’

Moroccan Ambassador to Belgium Mohamed Ameur recalled the role of the successive Moroccan Kings in advancing relations with Israel and the fact that Moroccans are proud of their Jewish heritage.

“The decision to restore diplomatic relations between Morocco and Israel is part of a millennial history of peaceful coexistence between Moroccans of the Jewish faith and their compatriots of the Muslim faith. This coexistence found its most powerful illustration in the refusal of the late Majesty, King Mohammed V, to hand over Moroccan Jews to the Nazis during WWII. In recognition of this historic gesture, His Late Majesty King Mohammed V was named as a Righteous Among the Nations in Yad Vashem.” 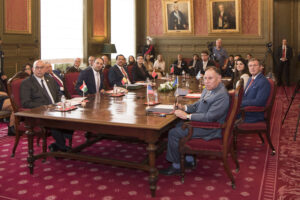 More than one million Israelis are from Moroccan origin. They have maintained strong ties with Morocco. ‘’Peace between Israel and Morocco is not only between nations but also between peoples,’’ the ambassador said. He also noted that relations between the two countries in several sectors are growing very fast.

‘’Morocco will continue to make efforts to advance peace and the resolution of the Palestinian question on the basis of a two-state solution,’’ the ambassador said.

All the diplomats insisted on the opportunities created by the Abraham Accords for the region. ‘’ “The signing of the Abraham Accords declaration in September 2020 marked a courageous and important step towards achieving peace in the Middle East. They have paved the way for a brighter future for the region. The UAE will continue to support all efforts to enhance stability and security for people across the region,’’ said UAE Ambassador Mohamed Al Sahlawi. ‘’My country believes that this is only a starting point for the region.’’

Bahrain’s ambassador Abdullah Bin Faisal Al Doseri explained that the region needs another approach to reach prosperity and stressed that his country is promoting coexistence between all communities. ‘’Bahrain has always stood open for the Jewish people,’’ he said, pointing to various synagogues that have existed in the Kingdom for over 100 years. “The Abraham Accords promoting coexisting between nations and this will promote peace and prosperity,’’ he added. He also insisted that the accords ‘’are not against anyone.’’

The Abraham Accords were initiated by the United St ates. ‘’ On this second anniversary, we were thrilled to be here together to celebrate the diplomatic successes, the friendships forged, and the exponential economic growth resulting from these agreements,’’ said U.S. Ambassador Michael Adler.

‘’As ever, the U.S. remain committed as partners in the normalization of relations between countries in the Muslim world and Israel,’’ he said, expressing the hope that many other countries will join Abraham Accords. 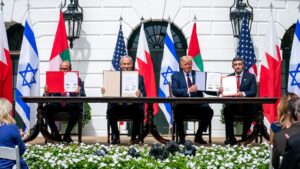 The signing of the Abraham Accords at the White House in Washington DC on September 15, 2020.

He continued, ‘’Common efforts to build bridges and create new avenues for dialogue will lead to a tangible improvement of the life of the Palestinians and to progress towards the goal of negotiating peace between Israelis and the Palestinians.’’

Israel was represented by the Deputy Chief of Mission in Belgium, Hadassah Aisenstark. as the new ambassador has not yet presented her credentials to the King.

“The virtue of peace brings many blessings. To this day, numerous agreements on economic and scientific cooperation have been initiated between the parties. Direct flights were launched between our countries, opening up the markets for mass tourism. Mutual trade has surged dramatically, demonstrating the enormous economic potential of these Accords,’’ she noted.

‘’It is our hope that more countries will follow the circle of peace in the near future,’’ she said.