You are at:Home»Uncategorized»Aalst carnival in Belgium displays costums featuring Jew-hatred, call for the EU to investigate Belgium

The carnival in the Belgian city of Aalst displayed dozens of antisemitic costums featuring  hatred against Jews on Sunday one year after antisemitic floats depicted Jews in a stereotypical way and despite calls for Jewish groups and the Israeli Foreign Minister to the Belgian authorities to ban such display of antisemitism.

The parade featured dozens costums of black-clad orthodox Jews as many-sized bugs, complete with papier-mâché insect shells and legs which invoked the Nazi-era dehumanization of Jews as vermin.

In the weeks leading up to the march, the organizers had reportedly sold hundreds of “rabbi kits” with over-sized noses to strap on, mock side locks, traditional black hats worn by orthodox Jews and a mock Western Wall 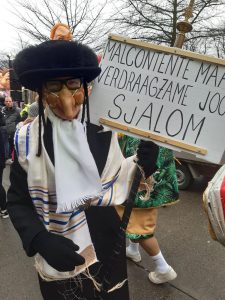 Also, hundreds of buttons with the image of a Star of David in the colors of the Aalst city logo were distributed for the public.

In a statement issued on Sunday, the AJC Transatlantic Institute condemned the parade which, it said, was allowed to occur unhindered by Belgian authorities and urged Belgian and European Union leaders to condemn the costumes and called on the EU to investigate Belgium.

“In this shameful moment, the world’s eyes are on Belgium. As the Flemish and federal Belgian authorities refused to prevent this grotesque public display of antisemitic hate – and in some cases even outright supported it – the European Union should immediately launch an investigation,” said Daniel Schwammenthal, director of the American Jewish Committee’s (AJC) Brussels-based Transatlantic Institute.

“The European Commission ought to consider an Article 7 procedure as the Belgian authorities did nothing to prevent the outright antisemitic costumes, which clearly violate the EU’s founding values, built on the lessons of the Holocaust and World War II. As the host of the EU institutions, Belgium has a particular responsibility to respect human dignity and human rights, including the rights of minorities,” Schwammenthal said.

Last year’s festivities featured one float depicting Jews with exaggerated features and side locks standing over bags of money and around rats. The caricatures recalled anti-Semitic tropes of the Middle Ages and Nazi Germany. 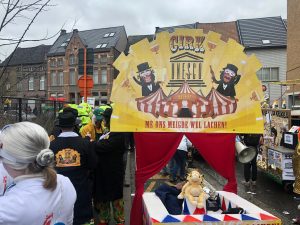 Many disguises on Sunday mocked the Jews but also UNESCO, the UN body for education and cukture, which last December removed the carnival from its list of Intangible World Heritage.

Israeli Foreign Minister Israel Katz had called on Belgium to “condemn and ban” the carnival, which he called an “anti-Semitic demonstration”. “Belgium as a Western democracy should be ashamed to allow such a vitriolic anti-Semitic display. I call upon the authorities there to condemn and ban this hateful parade in Aalst,” he tweeted.

Flemish Minister of Internal Affairs and Equal Opportunities Bart Somers refused on Thursday to ban the cartoons targeting the Jewish community during the carnival. However, he called the Mayor of Aalst, Christoph D’Haese to convince the carnival participants “that there are things with which you do not laugh”.

“The government’s ought to have listened to Belgium’s Jewish community, some of whom are considering leaving Europe. The EU ought to send a clear message to Belgium that this behavior has no space in the EU,“ Daniel Schwammenthal said. 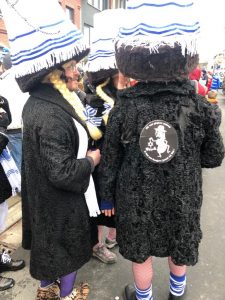 According to the EU Agency for Fundamental Rights’ December 2018 survey of some 15.000 Jews, there was an alarming rise of antisemitism in Europe and particularly in Belgium. The survey showed that 86% of Belgian Jews – second only to French Jews with 95% – are worried about antisemitism.

According to the Times of Israel, Belgium’s Prime Minister, Sophie Wilmes, described the parade as an “internal affair” after Israel called for the parade to be cancelled.

A member of the company “De Zwiejtollekes” who owns the antisemitic float displayed at the Aalst carnival was quoted by Flemish daily Het Laatste Nieuws as saying: “It’s Aalst. We laugh at everything. Except for the Brabant killings, the Marc Dutroux case and the genocide in Rwanda. This is too much. ”

Asked about the six million Jews murdered during the Holocaust, he replied: “It was so long ago. I was not even born at that time, and yet I am old. It’s far behind, right?”