You are at:Home»Israel»At Jerusalem World Holocaust Forum, Ukraine’s president gives up his seats to Holocaust survivors

“The industrial mass murder of six million Jews, the worst crime in humanity, was committed by my country. The terrible war, which cost over 50 million lives, originated in my country,” said German president Frank-Walter Steinmeir said in his speech.

US Vice President Mike Pence said that task of remembrance was “a solemn obligation,” to prevent the memory of those who murdered from being forgotten.

Russian President Vladimir Putin called the Holocaust “one of the most terrible chapters of human history” and said remembering it “is our shared responsibility to the past and the future.”

French president Emmanuel Macron said: “After all that has passed, anti-Semitism and the scourge of anti-Semitism has returned, and with it, xenophobia and intolerance have also raised their ugly heads.”

JERUSALEM—The president of Ukraine, Volodymyr Zelensky, gave up his seat and those of his delegation to Holocaust survivors at the 5th World Holocaust Forum ceremony that took place Thursday at Yad Vashem in Jerusalem.

There was only a limited number of seats available in the room for Holocaust survivors. “We learnt that many of the Holocaust survivors have not been able to attend the World Holocaust Forum. Our delegation gave them our seats, as many Israeli ministers did. These people deserve these honors most of all. We will participate in all events and hold scheduled meetings,” Zelensky, who is Jewish, tweeted.

Over 40 world leaders and dignitaries attended the World Holocaust Forum ceremony, marking the 75th anniversary of the liberation of the Auschwitz-Birkenau camp.

Several of the leaders addressed the audience. German President Frank Walter Steinmeier chose to speak in English and not German as he emphasized the responsibility of the Germans to the Holocaust and the Second World War.

“I stand here in Jerusalem laden with historical guilt,” he said, “Germany’s responsibility does not expire.”

He started his speech in Hebrew by reciting the blessing  “thank God we are here today.” He said that “Germans tried to dehumanize them [the Jews]…they did not succeed.”

“The industrial mass murder of six million Jews, the worst crime in humanity, was committed by my country. The terrible war, which cost over 50 million lives, originated in my country,” Steinmeir said.

“The Eternal Flame at Yad Vashem does not go out. Germany’s responsibility does not expire. We want to live up to our responsibility. By this, you should measure us,” he said.

The German president expressed concern over continued anti-Semitism in his country, citing the shooting on a synagogue in the city of Halle lasy year.

“I wish I could say that we Germans have learnt from history once and for all. But I cannot say that when hatred is spreading,” he said. 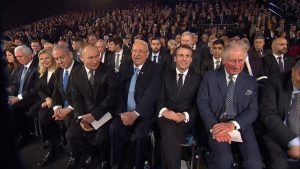 “But it is the same evil,” he asserted. “And there remains only one answer: Never again! Nie wieder! That is why there cannot be an end to remembrance.”

He  vowed to combat anti-Semitism, as well as “the poison that is nationalism.” He promised to protect Jewish life in Germany and to stand with the State of Israel.

“Here at Yad Vashem, I renew this promise before the eyes of the world. And I know that I am not alone. Today we join together to say: No to anti-Semitism! No to hatred!” he stated.

The German president also thanked the State of Israel and Jews around the globe for not shunning his country after the Holocaust.

“My soul is moved by the spirit of reconciliation, this spirit which opened up a new and peaceful path for Germany and Israel, for Germany, Europe and the countries of the world,” he said.

All world leaders who spoke emphasized the importance of remembering the Holocaust and acting on its lessons amidst the resurgence of antisemitism and xenophobia around the world.

US Vice President Mike Pence said that task of remembrance was “a solemn obligation,” to prevent the memory of those who murdered from being forgotten.

“Today we remember what happens when the powerless cry for help and the powerful refuse to answer,” said Pence.

Pence also spoke warmly of Israel, saying that “the world can only marvel at the faith and resilience of the Jewish people, who just three years after walking in the valley of the shadow of death, rose up from the ashes to reclaim a Jewish future and rebuild the Jewish State.”

“I’m proud to say as vice president of the United States that the American people have been with you every step of the way since 1948. And so we will remain,” Pence said about Israel.

At the end of his speech, the US Vice President said in Hebrew: “May he who makes peace in heavens make peace among Israel as well.”

Russian President Vladimir Putin called the Holocaust “one of the most terrible chapters of human history” and said remembering it “is our shared responsibility to the past and the future.”

“We mourn for all the victims of the Nazis, including six million Jews,” he said. “These death camps were operated not just by Nazis but by their henchmen in various countries.”

Putin said the Soviet Union “paid the highest price, more than any other. Twenty-seven million Russians were killed. That is the price of victory.”

He said the Red Army, which liberated many of the Nazi death camps, had “put an end to these crimes.”

“We need to find the courage not just to speak about anti-Semitism but also to do everything in our power to protect Jews,” Putin said.

Prince Charles of Britain, who is on his first official visit to Israel, said that ‘’it is a particular honor, although one of the most solemn kind, to be here today on behalf of the United Kingdom, to remember all those lost in the Shoah.”

“It is of particular significance that we should gather here in Israel, where so many that sought shelter from the Holocaust found refuge,” he added.

He recalled the fact that his grandmother Princess Alice saved a Jewish family and is among the Righteous Among the Nations. ‘’This gives me and my family immense pride.”

“Can one have even imagined this happening nowadays? For us to be so united in remembrance?” he said in his speech. “This is not just history that one can read this way or another. No, there is truth and history with evidence. Let us not be confused between these things.”

The French leader said: “After all that has passed, anti-Semitism and the scourge of anti-Semitism has returned, and with it, xenophobia and intolerance have also raised their ugly heads.”

‘’We will not allow ourselves to stand by in silence because we promise to remember and to take steps. Remember, never forget,’’ Macron said.

In his address, Moshe Kantor, president of the World Holocaust Forum and the European Jewish Congress, spoke of an ‘’extremely precarious situation’’ of the Jewish communities.

“According to surveys, more than 80% of Jews say they feel unsafe in Europe today with more than 40% said they have considered leaving the continent,” he said.

“In recent years, around 3% of Jews have emigrated from Europe annually because of antisemitism, meaning that in only 30 years, if the current trends persist or worsen,

The Yad Vashem event, titled “Remembering the Holocaust, Fighting Antisemitism,” was organized by the World Holocaust Forum Foundation in cooperation with Yad Vashem, under the auspices of the President of the State of Israel, Reuven Rivlin who hosted on Wednesday a dinner for the leaders and dignitaries at his residence.