Breaking
You are at:Home»Western Europe»Which are the most and least friendly countries for Jewish life in Europe?

A comprehensive study  found unveiled at the European Jewish Association conference in Budapest found that the least friendly countries to Jewish life in Europe are Belgium and Poland. The friendliest countries are: Italy and Hungary

“The aim of the study is not to clash with this or that governmentbut to create a comparative scientific infrastructure on the quality of Jewish life in various European countries and allow community leaders and government heads to know what practical steps are needed to overcome the challenges together,” says EJA Chairman Rabbi Menachem Margolin.

At the annual conference of leaders of Jewish communities organized by the European Jewish Association (EJA) in Budapest on Monday, a comprehensive study conducted in the last two years was presented that examines the performance of European governments.

The study, conducted under the scientific direction of Dr. Daniel Staetsky, Head of the Demographic Unit of European Jews at the Institute for Jewish Policy Research in London, was formulated after consulting with Jewish community leaders and organizations in various European countries.

It weighs practical activities such as the fight against anti-Semitism, the security of the Jewish community, freedom of religion  cultivating Jewish culture and even how state votes regarding Israel at the UN.

The study also weighs government performance data based on previous surveys that analysed the feelings of security experienced by European Jews, as well as the percentage of Jews who have experienced antisemitic incidents in person and the percentage of the public who hold negative views against Jews and Israel. 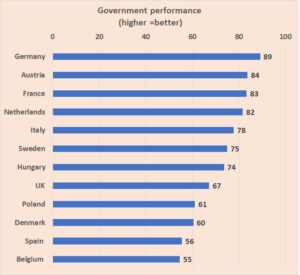 Belgium is the country that takes the least action on Jewish life in the country.

The countries where Jews in Europe feel most secure are Denmark and Hungary, with Hungary also in first place with the lowest number of Jews experiencing antisemitic attacks, followed by Italy.

After weighting the surveys that have taken place in recent years regarding the performance of European governments, below is a ranking of the quality of Jewish life in European countries.

The following is a ranking of the performance of European governments for the benefit of the Jewish communities in the various countries:

Commenting the study, Rabbi Menachem Margolin, Chairman of the European Jewish Association said: “Over the years we have seen important and diverse, and often divergent studies on the life of Jewish communities. It was difficult to translate the findings of these studies and surveys into a comparative scientific database and even more challenging to ascertain from the data of the various studies a uniform objective measure to really improve the life of the community and the Jewish individual in his or her country. ” 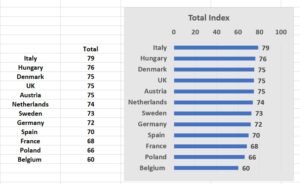 Rabbi Margolin stressed that ‘’the aim of the study is not to attack this or that government and certainly not to embarrass or campaign against this or that government but to create a comparative scientific infrastructure on the quality of Jewish life in various European countries and allow community leaders and government heads to know what practical steps are needed to overcome the challenges together.’’

At the same time, “the fact that there are residents who smile at us on the street and there is a general feeling that the government listens to the needs of the community, or that there is no existential anxiety on a daily basis, does not mean that the state does its best to ensure the development of the Jewish community,” he added. 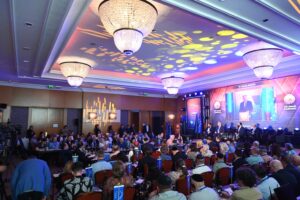 View of the conference of the European Jewish Association in Budapest.

“For example, Belgium is a country where the inhabitants are generally satisfied, but when you go into details, you see that the country does the least for the continuation of Jewish life in Europe compared to all other European countries,” said Rabbi Margolin.

The Belgian government, which holds the last place in the study, significantly reduced security around the Jewish communities without even consulting them, banned kosher slaughter and threatened the issue of circumcision, did not appoint a coordinator for the fight against anti-Semitism and more.

The positive point is that of all 12 countries surveyed, they all score above 60. There is not a single country in the “red zone” indicating a tangible danger to the life of the Jewish community in the near term. It is certainly a good worthy infrastructure for improvement and upgrade despite the political and social challenges we have to deal with.” 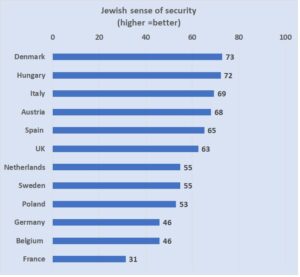 Joel Mergui, Chairman of the Consistoire of Paris, a city where the largest Jewish community in Europe lives, spoke about the findings of the survey and noted: “This survey corresponds to what happened yesterday in France with the elections which saw the rise of populism both from the extreme left and extreme right. Despite the positive measures taken by the government, French Jews do not feel secure. We need to fight antisemitism and antizionism not only on the level of govt but more on the level of the population. We need to appoint a national coordinator specifically on antisemitism and not only on racism and xenophobia,’’ he said.

The two-day annual EJA conference is held in the Hungarian capital in partnership with the Association of Hungarian Jewish Communities, with the participation of political leaders and dozens of delegations from Jewish communities across Europe

In an address to the conference, Hungarian Deputy Prime Minister Zsolt Semjén, underlined the fact that ‘’Hungary has zero tolerance toward antisemitism. The lessons of the Holocaust are part of the curriculum our schools and Holocaust denial in the country is unacceptable.”

Speaking about Israel, he said: “We don’t like double standards and quite often some EU members adopt a double standards policy when it comes to Israel, for ex the funding of NGOs that are very anti-Israel.”

Addressing the ban on kosher slaughter in Belgium, Semjén said: “We condemned Belgium for banning ritual slaughter. Animal rights should not be put above the right of religious minorities to freely practice their religion.”

Israel’s Minister of Diaspora Affairs Nachman Shai, who spoke to the conference attendees live from Jerusalem, noted that: “Israel is open to dialogue and fair criticism. This is part of the normal interactions in the global arena. But antisemitic expressions or physical attacks that use anti-Israel rhetoric to mask themselves are unacceptable and intolerable.We must not forget that Israel was created by the Diaspora. We are one family and we take care of every Jewish community, large or small. We must work together to make sure that Jews, wherever they live, will feel part of the global Jewish family. This has always been the a big pillar of the survival of the Jewish people throughout history.”

On the gala eve of the conference, the Minister of the Interior of Hungary Sándor Pintér received the prestigious King David Award for his long-time support to Jewish communities in Hungary and throughout Europe