You are at:Home»Eastern Europe»Prosperous Jewish life in Hungary, increasing anti-Semitism in Western Europe

BRUSSELS—While antisemitism is surging in the main Western European states, like France, the UK and Germany, Hungary is witnessing a low number of antisemitic incidents and Jews in the country are enjoying a good and prosperous life, said a senior member of the Hungarian government.

Vince Szalay-Bobrovniczky, Hungarian State Secretary for Civil and Social Affairs in the government of Viktor Orban, was speaking last week at a conference on ‘’human rights and free speech’’  in the European Parliament in Brussels, an event which featured American thinker, writer and radio host Dennis Prager.

‘’In Hungary, there is zero tolerance on antisemitism,’’said the Hungarian official.

‘’We have antisemitism in our country but not in the political sphere. There are radicals but not in number. In society, there is typical antisemitism but it is not a problem for the Jewish community.’’ 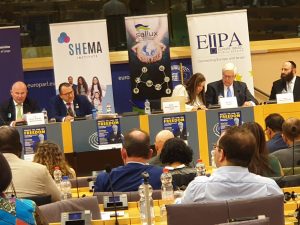 ‘’They live in security and freedom,’’ said Szalay-Bobrovniczky. The number of physical attacks is very low and there are no attacks against cemeteries and synagogues like in some other countries.

‘’The only attacks come from Western European tourists, mainly British who show aggressivity towards the Jews in the country. ‘’There have been several cases reported in the Hungarian media over the last weeks, ‘’ noted the Hungarian Minister.

‘’It is not  surprising when you hear statements spreading antisemitism n the second largest British party,’’ he said, in a reference to Jeremy Corbyn’s Labour party. ‘’Muslims are more relevant for the Labour party than the Jews,’’ he said. ‘’Jews do not count when it comes to elections,’’ he added.

‘’In Hungary, Jews are not unhappy with the fact that we defend the country against migration as migrants are not very good friends of Jews,’’ the Minister stressed.

The conference also featured Rabbi Menachem Margolin, head of the European Jewish Association, who strongly denounced attacks against freedom or religion in Europe. ‘’There are still legislators trying to ban fundamental Jewish religious customs,’’ he said. He deplored that freedom of religion ‘’has become a political battlefield.’’