You are at:Home»USA»One killed, three injured in shooting at Chabad of Poway, California, 19-year-old suspect apprehended

Lori Gilbert Kaye, 60, succumbed to her injuries suffered in the attack. Also wounded were a girl and two men, including the synagogue’s rabbi, 57-year-old Yisroel Goldstein.

A lone gunman entered Chabad of Poway in Southern California during Saturday-morning services on the last day of Passover and sprayed bullets into the synagogue, killing one woman and injuring three others.

An off-duty Border Patrol Agent who was in the synagogue, which is located about a half-hour outside of San Diego, fired at the shooter, hitting his car. The gunman fled the scene, but was soon apprehended without incident after he called 911 to admit to committing the crime, in addition to providing his location.

He was identified as 19-year-old John Earnest of San Diego.

San Diego County Sheriff Bill Gore said Earnest was armed with an “AR-type assault weapon,” and added that he was being interviewed by the FBI and detectives.

Gore did not provide a motive behind the shooting.

Lori Gilbert Kaye, 60, succumbed to her injuries suffered in the attack. Also wounded were a girl and two men, including the synagogue’s rabbi, 57-year-old Yisroel Goldstein, who were rushed to nearby Palomar Medical Center in Escondido, reported the ABC News affiliate in San Diego.

Goldstein was expected to lose his right index finger, but may keep his left one, said trauma surgeon Michael Katz, reported the NBC News affiliate in San Diego.

The attack occurred exactly six months after the deadliest shooting in American Jewish history, when a gunman killed 11 worshippers in the Tree of Life*Or L’Simcha Synagogue in Pittsburgh on Oct. 27, 2018.

‘This is not Poway’

“I want you to know, this is not Poway,” said Mayor Steve Vaus of the Southern California city, who labeled the shooting as a hate crime, said during cable-TV interviews. “We always walk with our arms around each other.” 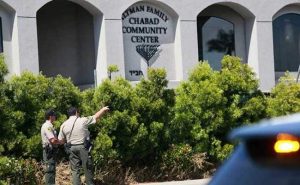 The Chabad synagogue in Poway, near San Diego, California.

“My deepest sympathies go to the people that were affected, the families, their loved ones … ,” U.S. President Donald Trump told reporters on the south lawn of the White House. “We’re doing some very heavy research, we’ll see what happens, what comes up … at this moment, it looks like a hate crime … my deepest sympathies to all of those affected, and we’ll get to the bottom of it.”

At a campaign rally the following evening in Green Bay, Wis., the president said, “Tonight, America’s heart is with the victims of the horrific synagogue shooting in Poway, California—just happened. Our entire nation mourns the loss of life, prays for the wounded, and stands in solidarity with the Jewish community. We forcefully condemn the evil of anti-Semitism and hate, which must be defeated.”

The White House declined to comment on the record if the president plans to pay his respects in Poway in the coming days.

“Charleston, Pittsburgh, Quebec, New Zealand — now our own Poway, California. No one should ever fear going to their place of worship. Hate continues to fuel horrific and cowardly acts of violence across our state, country, and world. It must be called out. CA stands with Poway,” tweeted California Gov. Gavin Newsom. 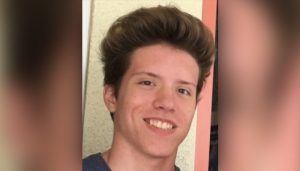 The gunman was identified as 19-year-old John Earnest of San Diego.

U.S. Sen. Diane Feinstein (D-Calif.) said, “Hearing about the shooting at Congregation Chabad in Poway breaks my heart. My thoughts and prayers are with the victims of this horrific attack.”

Feinstein added that “hate has no place in our country,” and that “we’re facing a rise in hate crimes and all of us have a duty to condemn hatred in all its forms whenever we see it,” along with calling for gun control measures.

“Yet again a place of worship is the target of senseless gun violence and hate. Anti-Semitism is real in this country and we must not be silent—enough is enough,” tweeted U.S. Sen. Kamala Harris (D-Calif.). “My heart aches for the Chabad of Poway synagogue and the Jewish community.”

Other members of the California congressional delegation also reacted to the shooting.

“Anti-semitism and hate have no place in America. My heart breaks for those affected by the attack on the Synagogue in Poway, California. I expect swift justice for the victims and their families,” tweeted U.S. House Minority Leader Kevin McCarthy.

“Today marks 6 months to the day of the deadly shooting at Tree of Life Synagogue in Pittsburgh. And on the final day of Passover, another shooting in Poway today. The rise of antisemitism, our endemic gun violence–none of it–is normal. Our country needs a reckoning with itself,” tweeted U.S. Rep. Harley Rouda, adding that, while his thoughts are with the congregation, “our concerns will mean little to the past and future victims of hate and violence without action. It’s time.”

Additionally, members of Congress outside California expressed grief over what transpired.

“While we’re still looking at information, the number of hate crimes & anti-Semitic acts in America is increasing at an alarming rate. The shooting at Chabad of Poway is devastating, and such anti-Semitism at the end of Passover is sickening. We must end gun violence in America,” tweeted U.S. Senate Minority Leader Chuck Schumer (D-N.Y.).

“Heartbroken to learn of another violent anti-Semitic attack—this time, at a Synagogue in Poway, California, on the last day of Passover. Another community devastated by an act of gun violence at their place of worship. This hate-fueled violence has no place in our society,” tweeted U.S. Rep. Lucy McBath (D-Ga.).

“I’m heartbroken about the shooting at the synagogue in #Poway, CA. This despicable act of Anti-Semitism on the last day of Passover, and 6 months after the #TreeofLifeSynagogue massacre, is sickening. May the victims’ families and the Jewish community know no more sorrow,” tweeted U.S. Secretary of State Mike Pompeo. “Anti-Semitism is a cancer. It’s an affront to religious liberty, which is at the core of our nation’s founding. All Americans stand with the Jewish people in the fight against the world’s oldest bigotry—on this sad day and always.”