You are at:Home»Eastern Europe»New Holocaust Memorial Center for the Jews of Macedonia

SKOPJE—The new Holocaust Memorial Center for the Jews of Macedonia will open for preview March 11 and 12 in Skopje, as part of the commemoration of 75th anniversary of the expulsion of Jews from the country.

This Museum, a national Holocaust Memorial established as a joint project with the Macedonian government, is the most prominent expression of the Macedonian Jewish community’s commitment to remember  and to invite others to join them in remembering all of its history in this land.

The museum allows the visitor to travel back in time and gain a sense of the rich history and vibrant culture of this community spanning two thousand years, before its tragic destruction in the Holocaust.

‘’We were searching for ways to present our history but we didn’t want a bland, dry recitation, we wanted it to be loaded with implications and questions for today, targeted for cross-generational education and experience’’ said Goran Sadikarijo, CEO of the Holocaust Memorial Center.

‘’After extensive research, we found Berenbaum Jacobs Associates to create our exhibition. We recognized their knowledge of history, sensitivity to audiences and their capacity to tell a story that is historically accurate, engaging, provocative and moving,’’ he added. ‘’They did an outstanding job.’’

Berenbaum Jacobs Associates created the Museum exhibition. ”We recognized their knowledge of history, sensitivity to audiences and their capacity to tell a story that is historically accurate, engaging, provocative and moving.They did an outstanding job.’’

2,000 years of Jewish life in Macedonia

98% of Jewish community were murdered by the Nazis in Treblinka.

Only three groups survived : those hidden by friends and neighbors, fighters who joined the Resistance and those released because they were physicians and pharmacists or foreign nationals of Axis or neutral countries.

The Jewish community dates back to ancient Roman times, then overwhelmed by influx of Sephardic Jews fleeing the Spanish Inquisition.

Under Ottoman rule, the Jewish community flourished. In 1560 the Jews of Skopje outnumbered other populations.

On March 11, 1943, the entire Jewish community of Macedonia were rounded up and detained in a tobacco warehouse in Skopje. Within 3 weeks, nearly all were transported to Treblinka death camp and gassed within hours.

The President of the Holocaust Fund Board, Blagoja Mladenovski, was born during the war. His mother had fallen in love with a football player who was not Jewish. The Mladenovski family hid them in their house, saving them from deportation to certain death.

Ichak Adizes: hid with his family in Albania

Ichak was 5-year-old when his family was deported. They were descendants of the Jews expelled from Spain in 1492 for refusing to convert to Christianity. When the Jews of Macedonia were deported by the Bulgarians, those that had Spanish passports were released as Spain was neutral.

Ichak watched as his entire extended family of 133 members were sent to Treblinka, looking out the same window that is now incorporated into the permanent exhibit.

His immediate family escaped to Albania, pretending to be Muslims from Bosnia, and hid in a small village with a caring Muslim family.

In 1948, Israel, the newly found Jewish State opened its gates to every Jew wishing to return to the homeland of the Jewish People. Most of the few survivors of the Macedonian Jewish community chose to immigrate to Israel.

The Rescue Missions of the Jews of the Balkans in 1948

The SS Kefalos was the designated carrier to bring the Jews from Yugoslavia to Israel.

During the months of November and December 1948, over 7500 new immigrants from Yugoslavia were brought to Israel on the Kefalos. 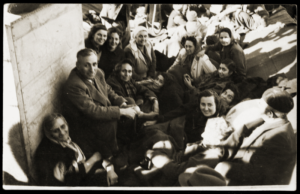 Yugoslav Jews on the decl of SS Kefalos ship sailing to Israel.

Among the surviving Jews of Macedonia who were aboard the Kefalos were Blagoja Mladenovski with his family, Ichak Adizes with his family and Shaul Gatenjo who was saved by his Slovenian Catholic nanny who kept him in hiding in a convent.

The S/S Kefalos was a 3,800 ton cargo ship purchased in April 1948 by the Haganah’s Procurement of Arms delegation in New York. It was designated to smuggle arms from the US and Mexico to the Jews in Israel fighting for their independence.

As the Kefalos sailed from the port of New York to Mexico flying a Panamanian flag, it was given the code-name Dromit, meaning southern. Under the command of a Jewish American Captain named Adolph Oko, five Jewish volunteers escorted the ship on its undercover mission, the largest shipment of weapons that had ever reached Israel.

Once unloaded, Dromit sailed to Napoli, Italy, where it was converted to carry immigrants. During the months of November and December 1948, while still under the captaincy of Captain Oko, the ship made two runs from Yugoslavia to Israel.