You are at:Home»Eastern Europe»Memorial tombstone unveiled on mass grave of Jewish community in Sadigora, Ukraine

SADIGORA—The Rabbinical Center of Europe (RCE) unveiled Thursday a memorial tombstone on a mass grave of  the Jewish community of the city of Sadigora in southern Ukraine.

Sadigora is important in the history of Hasidic Judaism. Before WWI, the Jewish population numbered over 5,000.

The Jews of Sadigora, a city located near the border with Romania and Moldova, thought that the Russian army’s victory over the German Nazi army during the fighting in the region in July 1941,  was the end of the war, and the end of the attacks on them by the Romanian Army who controlled the area and cooperated with the Nazis.

However, the Russian command allowed local Ukrainian and Romanian gangs a “24-hour window to do with the Jews as they will”. The relief sensations of the Jewish community of the region became a murderous nightmare. 1,200 Jewish children women and men were murdered and buried – some of them when they were still alive.

“We played together – all of the children and suddenly our Jewish friends began to disappear one by one,” said an elderly Ukrainian woman who was present at the time of the acts, during the unveiling ceremony.

The mass grave and the hidden testimonies were found in part by Rabbi Mendi Glikstein of the nearby city of Chernivtsi who harnessed the RCE in order to establish a headstone on the mass grave.

The unveiling ceremony was attended by the district’s Governor, Eiom Vasilovitz, , Israel’s ambassador to Ukraine, Joel Leon, RCE General Director, Rabbi Arye Goldberg, Chief Rabbi of the nearby Jewish Community of Jetimore and Western Ukraine, Rabbi Shlomo Wilhelm, members of the small Jewish community who survived  the massacre and Ukrainian neighbors, some of whom testified how they could feel the “earth burning underneath their feet” even days after the terrible massacre took place.

The unveiling is part of a mission that the RCE took upon itself to locate and establish tombstones on other Jewish mass graves in Ukraine. “We collect evidence and testimonies as much as possible from elderly Jews and Ukrainians who still remember. We than locate the mass graves and only after a team of experts confirms the findings, we establish tombstones for the memory of the victims,” explained RCE General Director, Rabbi Arye Goldberg. 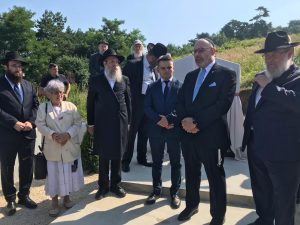 From R to L: RCE Director Rabbi Arye Goldberg, Israel’s Ambassador to the Ukraine, Joel Leon, the district’s Governor, Eiom Vasilovitz, Chief Rabbi of the nearby Jewish Community of Jetimore and Western Ukraine, Rabbi Shlomo Wilhelm, the local witness, Bella, and Rabbi Mendi Glikstein of the nearby city of Chernivtsi
Picture by RCE

RCE Chairman,Rabbi Menachem Margolin said that locating and establishing tombstones  was held in parallel with the effort to further and renew Jewish lifeacross Ukraine, as well as restore  synagogues and mikvehs.

Israel’s ambassador Joel Leon who carried the Kaddish prayer in the ceremony, thanked the RCE for the initiative and its implementation in the field, and said that the embassy was conducting a special program for training Ukrainian teachers on how to teach the  lessons of the Holocaust in schools throughout the country.