Biden’s victory came after more than three days of uncertainty as election officials sorted through a surge of mail-in votes that delayed the processing of some ballots.

“I am honored and humbled by the trust the American people have placed in me and in Vice President-elect (Kamala) Harris. In the face of unprecedented obstacles, a record number of Americans voted,” the former Vice President under Barack Obama said on Twitter.

Kamala Harris is making history as the first Black woman to become vice president. The California senator and former attorney general, who is also the first person of South Asian descent elected to the vice presidency, will become the highest-ranking woman ever to serve in government, four years after Trump defeated Hillary Clinton. 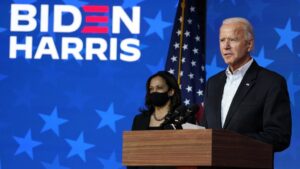 The first Israeli politician to congratulate Biden was opposition leader Yair Lapid, who said “I look forward to working with the new administration and members of both parties in Congress.”

Israeli Justice Minister and senior Blue and White party member Avi Nissenkorn also congratulated Biden on his victory, and to his running mate and Vice President Elect Kamala Harris who he noted would be the first woman to serve as vice president.

“Congratulations too to the entire American people for this fitting democratic process,” said Nissenkorn.

Israeli Prime Minister Benjamin Netanyahu was yet to comment.

Statement by President Charles Michel on the 2020 US Presidential elections

“”We welcome the record voter turnout. We follow the process of certification of results and are confident that the US electoral system will soon announce the final outcome,” he added.

”The EU underlines, once again, its commitment to a strong transatlantic partnership and stands ready to engage with the elected President, new Congress and Administration,” the statement concluded.