Breaking
You are at:Home»Western Europe»Jewish group protests invitation by EU parliament of Iranian official said to have links with bombing of Buenos Aires Jewish center

BRUSSELS —The Simon Wiesenthal Centre has protested the invitation made by the European Parliament to an Iranian senior official who is said to have links with the 1984 bombing of a Jewish center in Buenos Aires.

Alaeddin Boroujerdi, who is the Chairman for the Committee for Foreign Policy and National Security of the Islamic Consultative Assembly of Iran, was invited for an ‘’exchange of views’’ at Tuesday’s meeting of the European Parliament foreign affairs committee (AFET) where is was due ‘’to present further information on the Iranian position on regional developments, the Joint Comprehensive Plan of Action and the current political situation in Iran.’’

According to Simon Samuels, the Simon Wiesenthal Centre Director for International Relations, Boroujerd is an Iranian alleged associate of top Hezbollah officials and of former Foreign Minister, Ali Akbar Velayati, who is sought under an Interpol red notice arrest warrant for alleged complicity in the bombing of the AMIA Jewish Centre which left 85 dead and over 300 wounded”. 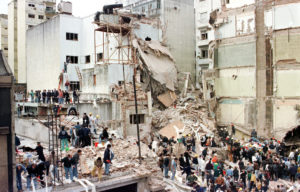 A powerful car bomb destroyed the Buenos Aires headquarters of
the Argentine Israeli Mutual Association (AMIA) July 1994. 85 people died and over 300 were wounded.

‘’Not only was Boroujerd invited to address the EP Committee on Foreign Affairs but he is scheduled on Wednesday to speak in a seminar on ‘Counter Terrorism’.  This travesty is equal to bringing the wolf into the chicken-coop. Indeed, an incentive to ‘lone wolves’ across Europe, awakened by Iran, the  terror-master”, he said.

The Centre argued that ” ‘Boroujerd at the EU Parliament’ sends a horrific message to all Iranian exiles, political prisoners in Iran, Jews and peace-lovers everywhere, that Europe is united on a path to the abyss”.

“Mr.President, we urge you to cancel this outrageous invitation forthwith”, concluded Samuels.