PARIS—A Jerusalem Square was dedicated in Paris on Sunday in the presence of the city’s Mayor Anne Hildalgo and her Jerusalem counterpart Moshe Leon.

Representatives of the Jewish, Catholic, Protestant and Coptic Christian communities were also present.

The square’s location is in the growingly Jewish 17th district where more and more Jewish families make their home after fleeing from Islamist-dense suburbs north of Paris.

Mayor Leon stressed his vision of a multifaith Jerusalem at peace with one another.

Anne Hidalgo justified the city council’s decision to inaugurate the square by the need “in this period of recrudescence of racist and anti-Semitic acts, to recall the links between Paris and the Jewish “community”, and to “commemorate the friendship that unites the city of Paris and the State of Israel “. 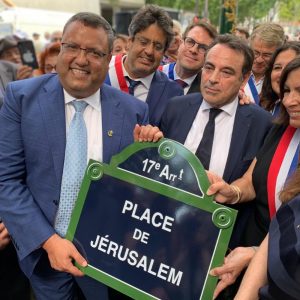 The president of the Central Consistory Joel Mergui, who was present, revealed  that the Paris’ decision “follows on my proposal expressed in January, at the reception of the President of Israel Reuven Rivlin at the City Hall.”

The Paris Mayor said that, as a World Heritage site, the Holy City is sacred to Jews, Christians and Muslims. She noted that in Jerusalem there is a Paris Square and the current inauguration should cement the friendship between the two cities.