Breaking
You are at:Home»USA»In sweltering heat, tens of thousands march in New York City to show support for Israel

“It’s heartwarming to see such a huge crowd,” said Robin Feit of Long Island, N.Y., whose son, Marc, was marching with his school. “It’s a real morale boost.”

Growing up, Jeremy Mazurek and Rachel used to march up Fifth Avenue in New York City with their schools to celebrate Israel, waving to family and friends on the sidelines who cheered them on during the Israel Day Parade.

The couple, who lives in the suburbs of Philadelphia, returned to do the same on Sunday for the 58th annual “Celebrate Israel Parade” this time with their three children—Yosef, Gabriella and Eliana—who are now marching with their own schools.

“We’ve been coming since we were little in the 1980s, and it’s exciting to be back post-COVID,  said Jeremy Mazurek. “It gives us a sense of pride, and it’s very emotional. We’re happy to bring the next generation to show our support for Israel.”

Yosef Mazurek, a 10th-grader at the Mesivta High School of Greater Philadelphia, believes that the rally shows that “people really do care, and it makes me happy to see people supporting Israel and that the whole world doesn’t hate us.”

As this was the first parade since the pandemic started, the theme was “Kulanu B’Yached” (“Together Again”). That sentiment was visible on floats and T-shirts worn by participants.

Despite temperatures well into the 90s, tens of thousands of people of all ages walked the 1.5-mile parade route to show their support for Israel. They waved flags, danced, sang, shook blue-and-white pom-poms and even blew bubbles at the crowds. Signs were held by groups affiliated with schools, synagogues and other groups, and a solid representation came from local and national leaders, including New York Gov. Kathy Hochul.

“It’s heartwarming to see such a huge crowd,” said Robin Feit of Long Island, N.Y., whose son, Marc, was marching with his school. “It’s a real morale boost and pride to know there’s so much support for Israel. We hear so much in the media about anti-Semitism, but this turnout shows they are not going to stop us.” 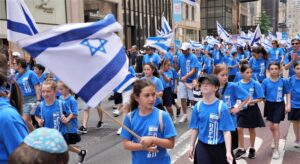 Children march in the “Celebrate Israel Parade” in New York City on May 22, 2022. Picture by Don Pollard/Office of Gov. Kathy Hochul.

Among those who experienced the Israel Day Parade for the first time was Dan Elbaum, head of the North America division for the Jewish Agency of Israel.

“It was amazing,” he said, “to see so many people turn out to cheer, despite the weather. It was really inspirational.”

The parade sends a message that despite two years of coronavirus lockdowns and occasional political disagreements, he said, “a significant amount of American Jews—not just Jews from New York but from around the country—come to wave the Israeli flag and show their solidarity, and to be there in a physical sense for the State of Israel.”