Isaac Herzog sends condolences to family of Eliyahu David Kay, killed in a Palestinian terror attack in Jerusalem on Sunday, and expresses gratitude for the U.K.’s decision to label Hamas a terrorist group.

The fact that the terrorist who carried out the attack in Jerusalem on Sunday, in which South African-Israeli Eliyahu David Kay was murdered “came from Hamas’s political wing requires that the entire international community recognize Hamas as a terrorist organization,” said Israeli President Isaac Herzog, shortly after landing in London for a two-day visit in the U.K.

On Twitter, Herzog posted that he had been updated on the attack in Jerusalem’s Old City Sunday morning.

“I offer my condolences to the family and friends of Eliyahu David Kay, may his memory be a blessing, in their time of mourning and pray for the speedy recovery of the wounded,” he wrote. 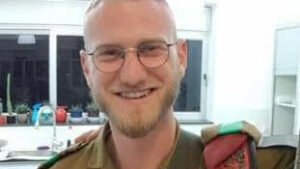 Eliyahu David Kay was killed in a Palestinian terror attack in Jerusalem. Hamas claimed the attack.

Earlier in the day, the president said that he was “thankful for the British government’s decision to recognize Hamas as a terrorist organization and all that that entails. This is an incredibly important step in the war on terror. Israel cannot allow Iran nuclear capability and it expects its allies to be decisive and uncompromising toward the Iranians in their dialogue with them.”

Upon departing Israel for London, Herzog said, “I am leaving today together with my wife, Michal, on an official 48-hour visit to Britain, one of Israel’s closest and strongest allies. I will meet with the heir to the throne, Prince Charles, and I will surely hear from him of his visit a few days ago to Jordan and Egypt, and we will discuss the climate crisis. Likewise, I will meet the British prime minister, a true friend of Israel, Boris Johnson, whom I have known for many years.”

While in the U.K., Herzog is also set to meet with Foreign Secretary Liz Truss, members of Britain’s parliament and Jewish community leaders. In addition, he will be the guest of honor at a special Genesis Prize event honoring the late U.K. Chief Rabbi Lord Jonathan Sacks on the anniversary of his death, to be attended by Jewish community leaders and senior U.K. government officials, both past and present.

Meanwhile, the U.K.’s The Telegraph newspaper published an opinion piece by Herzog that morning, titled, “We must restore faith in the power of dialogue.” In the piece, Herzog calls for increased dialogue between Israel and the United States to stop Iran’s nuclear armament.

“Iran does not want dialogue,” he writes. “It is exploiting the world’s willingness to negotiate to buy time. Israel cannot allow the fundamentalists of Tehran to acquire a nuclear bomb. The moderate nations of the Middle East need their allies, including Britain, to engage them in an urgent dialogue on how to stop Iran instead of wasting time on its games.”

Later in the peace, Herzog implores for dialogue, moderation and pragmatism, pointing to the Abraham Accords and the solution to the political crisis in Israel as proof of the power of dialogue in finding solutions to challenges that seem unsolvable.

On Monday, President Herzog will meet with the Prince of Wales, Foreign Secretary Liz Truss and members of parliament.

The President was also there to celebrate the 92nd birthday of Sir Ben Helfgott, a Holocaust survivor and weightlifting champion. Herzog described his story as “the power of an unbreakable will to overcome the darkest evil, and of the ability of the human spirit, to overcome the greatest inhumanity. The inner strength and resolve necessary to go from a concentration camp inmate in 1945, to competing in Israel in the Maccabiah Games in 1950, and in the Olympics in 1956, is almost unimaginable.”