You are at:Home»Western Europe»German Ursula von der Leyen confirmed by EU Parliament as new President of the European Commission

During her visit to Israel in May 2015 as German Defense Minister, Ursula von der Leyen wrote in the Yad Vashem guest book that the “security of Israel is Germany’s raison d’être.”

The 60-year-old woman, who was Defense Minister in Germany for six years, is the only minister to have served continuously in German Chancellor Angela Merkel‘s cabinet since she took office.

Von der Leyen, whose nomination was proposed by the EU Council of heads of state or government,  is set to take office on 1 November for a five-year term. There were 733 votes cast, one of which was not valid. 383 members voted in favour, 327 against, and 22 abstained. The European Parliament currently comprises 747 MEPs , so the threshold needed to be elected was 374 votes, i.e. more than 50% of its component members.

A member of the centre-right German Christian Democratic Union (CDU), she is the first woman to hold the office of German Defence Minister and the first to become President of the European Commission.

European Parliament President, Italian  David Sassoli, said: “On behalf of Parliament, I congratulate you on your election as President of the European Commission. The next few years will be very important for the future of the European Union and we can only tackle successfully the issues you spoke about today in front of the plenary if there is close and full cooperation between the institutions.”

The Commission President-elect will now send official letters  to the member states’ heads of state or government inviting them to propose their candidates for members of the Commission. Hearings of the nominees in Parliament’s competent committees are scheduled to take place from 30 September to 8 October. The full college of Commissioners then needs to be elected by Parliament, most likely in its 21-24 October session.

The World Jewish Congress (WJC) extended its congratulations to Ursula von der Leyen for her confirmation by the European Parliament.

WJC President Ronald S. Lauder said: “Antisemitism still remains a grave threat to much of European Jewry, but the WJC is confident that Ms. von der Leyen’s leadership will augment the institutional mechanisms currently in place to identify antisemitism and root it out at its source.”

“The European Commission has taken significant strides to ensure the safety and security of Jewish communities across the continent by promoting educational endeavors and helping nations build strategies to reflect local circumstances,” Lauder noted. By allocating necessary resources to this end, Jewish communities will see “tangible changes in their daily lives,” he added, expressing his personal gratitude for these efforts, notably “the call to increase Holocaust education in Europe.”

The European Council’s unanimous declaration in December 2018 to combat antisemitism in a strategic manner, Lauder said, “sent a clear message to Jewish communities that the European Union is committed to fighting all incarnations of this age-old hatred.”

“At the institutional level, Europe has distinguished itself for its noteworthy responses, both reactively and proactively, and the WJC trusts that Europe will continue to lead the charge on the global stage,” Lauder concluded.

As German Defense Minister Ursula  von der Leyen visited Israel in May 2015,    as part of the 50th anniversary of diplomatic relations between the two countries. She met Israeli Prime Minister Benjamin Netanyahu, then Defense Minister Moshe Yaalon  and visited the Yad Vashem Holocaust memorial museum in Jerusalem as well as injured IDF veterans an Holocaust survivors.

“In the 50 years since formalization of our diplomatic relations, Germany has proven in word and in deed its commitment to Israel’s security,” Netanyahu told von der Leyen.

Von der Leyen has stated that ‘’without Israel Germany would not be Germany.’’ ‘’We Germans are fortunate that the Israelis have shaken hands with us for reconciliation. The encounters between Germans and Israelis go much further and deeper than diplomatic relations,’’ she added.

During her visit, she underlined her country’s desire to s to contribute to the protection and livelihood of Israel”. She wrote in the Yad Vashem guest book that the “security of Israel is Germany’s raison d’être.” 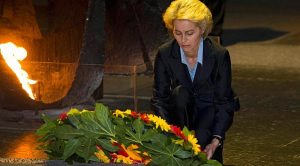 German Defense Minister Ursula von der Leyen leays a wreath in the Remembrance Hall of Yad Vashem in Jerusalem, in May 2015.

In 2017 she strongly condemned the burning of Israeli flags during a pro-Palestinian demonstration in Berlin and called for a crackdown on anti-Israeli rallies in the country. ‘’I find it unbearable that Israeli flags burn in Germany,” the Defense Minister said.

Regarding the Israeli-Palestinian conflict, she declared after the the decision by U.S. President Donald Trump to recognize Jerusalem as the capital of the State of Israel that the German government would not share this path. “Germany will not recognize Jerusalem as the capital of Israel,” said the minister. “We are aiming for a two-state solution for Israel and Palestine. It can only be negotiated, as difficult as they will be,’’ she added.