You are at:Home»Western Europe»French Jewish community calls for investigation into revelations of secret pact with Palestinian terror group

On August 9, 1982, at 1:15 pm, a grenade is thrown in the jewish restaurant and delicatessen of Jo Goldenberg, located rue des Rosiers, in the historic Jewish quarter of Paris. A commando then enters the establishment and fires burst. About fifty customers are at this time in the establishment.

PARIS—France’s Jewish community umbrella representative group, Crif, has called for a parliamentary investigation into  revelations by a former French intelligence chief that the country’s security services agreed a secret non-aggression pact with a Palestinian terrorist group.

Last week, French daily Le Parisien reported that French authorities made a secret pact with the Palestinian terrorist organization behind the 1982 bombing attack of the Chez Jo Goldenberg Jewish restaurant  in Paris  which killed six people and wounded 22.

According to the newspaper report, the terrorists, members of the Abu Nidal group, , were guaranteed free movement in France in exchange for a promise of no further attacks on French soil.

The paper quotes the former head of French domestic intelligence (DST) Yves Bonnet who reportedly confessed to an investigation magistrate in January to making the deal.

“We made a kind of verbal deal in which I said, ‘I don’t want any more attacks on French soil and in return, I’ll let you come to France, and I guarantee nothing will happen to you,’ ” he told the magistrate.

Francis Kalifat said the revelations warranted “the establishment of a parliamentary committee of inquiry and the lifting of defense secrecy” around the investigation into the rue des Rosiers attack and its aftermath.’’

The Crif president also stated that his organization was also calling on President Emmanuel Macron “to do everything possible at the diplomatic and judicial level to ensure that the terrorists responsible for this massacre, who have taken refuge in Jordan, the West Bank and Norway, will face French justice.”

On August 9, 1982, at 1:15 pm, a grenade is thrown in the jewish restaurant and delicatessen of Jo Goldenberg, located rue des Rosiers, in the historic Jewish quarter of Paris. A commando then enters the establishment and fires burst. About fifty customers are at this time in the establishment.

Composed of three to five armed men, according to a source close to the file, the commando goes back then the street of the Rosiers, emptying in the direction of passers-by the loaders of their machine guns “WZ-63”, of Polish manufacture. In less than three minutes, the attack left six dead and 22 wounded. 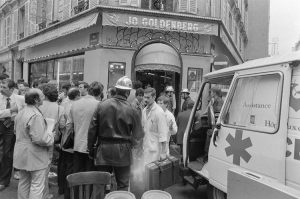 Meanwhile, in the Marais district, traces of the attack disappear. Jo Goldenberg’s restaurant closed its doors in 2006. Only a commemorative plaque, fixed in 2011 to replace the previous one, inaugurated in 1983 by François Mitterrand and disappeared in 2007, preserves the memory of this tragic event. And, 37 years after the fact, the victims are still waiting for a trial.

In March 2019, Francis Kalifat had asked to meet with Ambassador Oda Helen Sletnes of Norway about the extradition to France of one of the suspected terrorists of the attack on the Jo Goldenberg’s restaurant.

Under the terms of an international arrest warrant, Walid Abdulrahman Abu Zayed, 54, a father of four, now lives in Norway in Skien, a town southwest of Oslo. But the country refuses any extradition or arrest of the suspect. It is his nationality that blocks the procedure. Walid Abdulrahmane is Norwegian since 2002 and the country does not extradite its national citizens.