Last week, the UAE officially ended its boycott of Israeli businesses and goods, paving the way for companies from both countries to start doing business with each other.

In another historic development, El Al flight LY971, its number picked to reflect UAE’s country code for international phone calls, is set to cross into Saudi airspace as part of the voyage.

The El Al Pilots Association says that the flight from Tel Aviv to Abu Dhabi takes three hours if the airline is allowed access to Saudi airspace, but could take up to eight hours if forced to use a roundabout route. 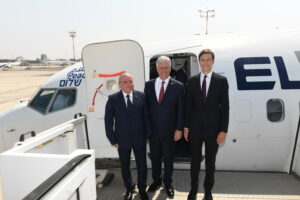 Following are Israeli delegation head Ben-Shabbat’s remarks prior to takeoff:”I am excited and proud to head the Israeli delegation to the talks in Abu Dhabi. We are leaving today for talks pursuant to the declaration by the three leaders – President Donald Trump, Prime Minister Benjamin Netanyahu and Crown Prince Mohammed bin Zayed – on the establishment of peaceful relations. Our goal is to achieve a joint working plan to advance relations in a very broad range of areas: Tourism, aviation, innovation, science, technology, health, economic matters and many others. This morning, the traditional blessing ‘go in peace’ receives special meaning for us. Thank you very much to everyone.”

One of the matters expected to be hammered out in the talks in Abu Dhabi is the date for a signing ceremony in Washington, D.C. that would see the two countries formalize their diplomatic relationship. 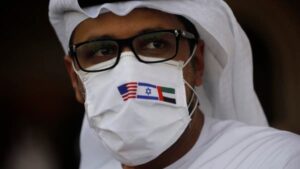 An Emirati man wearing a mask bearing the national flags of the U.S.,Israel and United Arab Emirates at Abu Dhabi International Aiport.

More Arab states should follow the lead of the United Arab Emirates (UAE) and normalize the ties with Israel, President Reuven Rivlin said at his meeting on Sunday with Senior White House Adviser Jared Kushner, congratulating US President Donald Trump’s son-in-law on helping to secure the historic agreement.

“I call on other Arab and Muslim states to follow this path of friendship and to establish full and warm relations with the State of Israel, peace between nations and peoples, peace for peace,” Rivlin said.

”We worked to defy the odds and achieve something few thought was possible,” said Kushner on Sunday during a joint statement with Israeli Prime Minister Benjamin Netanyahu and US National Security Advisor Robert O’Brien.

He praised United Arab Emirates (UAE) ruler Mohammed bin Zayed as a “courageous visionary,” saying his decision to normalize ties with Israel will be “an inspiration for the Middle East.”

Israel’s national security adviser Meir Ben-Shabbat spoke at the ceremony welcoming the  Israeli-American delegation on its first flight to the United Arab Emirates. In Arabic, he said that the delegation has come to turn a dream into reality.

Switching to Hebrew, Ben-Shabbat thanked the regional leaders for their “vision and efforts invested to get to this moment.”