Breaking
You are at:Home»Western Europe»EU’s top official on combating anti-Semitism: ‘We do everything to ensure a future for Jews in Europe’

By Ilona Fuksman and Yossi Lempkowicz

1.Are you worried by the rise of populist parties in Europe in view of the 2019 European elections ?

I think that many people are worried about the rise of populist parties. Not only with regards to the elections but also generally in terms of the atmosphere it creates in society. We must be very clear that with regards for example to antisemitism there is no place for antisemitism in the middle of our society or anywhere else. I think that it is also important to address this issue in the framework of the upcoming elections.

This is completely up to the Jewish community.

I think that on European level we have done a lot. For example, the code of conduct for social media platforms to remove illegal hate speech from the internet. This is something where there is a clear added value for the European Union. We are much stronger when we negotiate together with the social media platforms.The same is for European legislation against hate crime and hate speech. It makes sense to have a legal basis that is in common to Member States. We have also introduced useful tools such as the use of the IHRA working definition to acknowledge all forms of Antisemitism. It is a useful tool for training of educators and state authorities. The European Parliament resolution on antisemitism is a solid basis for further action on European and national level. And then  there are also activities that are clearly within the competences of the Member States such as education, security, police, the legal system… All that is in the member states’ hands and we fully respect that. And we work closely with them. 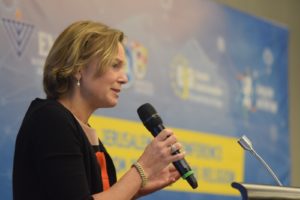 We have been very clear that there cannot be any impediment to freedom of religion. European Commission Vice-President Frans Timmermans has also said this for example with regards to kosher slaughtering. However, again, it’s a question for each Member State and it is not a European competence where we could pass legislation that would then be applicable across the EU. At the end it’s up to the Member States. But we do everything to ensure a future for Jews in Europe and also to come to a situation where Jews can live in normality. Which means that they don’t have to take life choices on the basis of security reasoning. They should be able to take any metro station without having to ask themselves : should I take this or another metro station ? They should be able to live anywhere they like to live, to send their kids to the schools of their choice. This is our ultimate goal for which we are working. We do also a lot in terms of funding and supporting projects in different areas, from Jewish heritage – like the project for Jewish cemeteries in central and eastern Europe-, to training law enforcement staff on antisemitism with the Facing Fact project….

Again, this is up to each individual member of the Jewish community. I think it would be very sad if that was to be the conclusion….European Commission Vice-President Frans Timmermand and Commissioner Vera Jourova have said repeatedly that ‘Europe without Jews is no longer Europe’. Therefore we do everything to ensure a future for Jews in Europe. But again it is the decision of every individual