The resolutions were adopted as amendments by the European Parliament’s Committee on Budgetary Control by MEPs across the EU political spectrum including members of the three largest political groups, the Center-Right European People’s Party (EPP), the left leaning Socialists and Democrats (S&D) and the liberal Renew Europe (RE) party. The resolutions were passed by over 60% majority of the EU Parliament.

The European Parliament passed three resolutions which condemn the Palestinian Authority (PA) for continuing to teach hate and violence in its school textbooks and which oppose European Union aid to the PA being used for this purpose.

The legislation notes that problematic material in Palestinian school textbooks has still not been removed, points to the continued failure to act effectively against hate speech and violence in Palestinian textbooks. It calls on the European Commission to ensure that salaries of teachers and education sector civil servants financed by the European Union are used to teach curricula that reflect UNESCO standards of peace, tolerance, coexistence and non-violence.

The resolutions were adopted as amendments by the European Parliament’s Committee on Budgetary Control by MEPs across the EU political spectrum including members of the three largest political groups, the Center-Right European People’s Party (EPP), the left leaning Socialists and Democrats (S&D) and the liberal Renew Europe (RE) party. The resolutions were passed by over 60% majority of the EU Parliament.

One of the resolutions relates particularly to Palestinian school textbooks and to the PEGASE fund, the main source of EU funding to the Palestinian Authority’s Education Ministry, which is responsible for drafting, writing, teaching and implementing the new PA curriculum.

German MEP Niclas Herbst of the European People’s Party stressed that ‘’EU funds should be spent on peace and mutual understanding. Paying teachers to teach Antisemitism and incitement to violence through Palestinian schoolbooks should never be subsidised by EU-money. The result of votes today is a strong signal on this regard.’’ 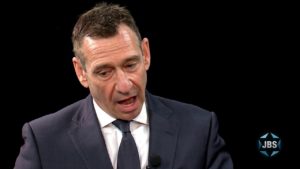 Impact-se CEO Marcus Sheff: ”This parliament, which oversees the spending of the European Commission, is clearly exasperated by the continued payment of massive grants to the Palestinian educational sector, which is then promptly turned into one of the most hate-filled, violent and extreme curricula worldwide. ”

Romanian MEP Christian Ghinea of Renew Europe insisted that ‘’no funds should be used for drafting and teaching curricula which includes support for intolerance. I believe that, under no circumstances, should European money contribute, even indirectly, to encouraging a logic of violence.’’

Swedish MEP Charlie Weimer of the European Conservatives and Reformists Party said that ‘’terrorism, extremism and hate can never be the answer and should under no circumstances ever be funded by EU taxpayers.’’ He added: ‘’ I fully welcome that the European Parliament voted in favor of keeping the strong language stating that incitement and support for terrorism in Palestinian schoolbooks is unacceptable. Peace needs to be promoted in the Palestinian curricula as to achieve a peaceful resolution of the Israeli-Palestinian conflict.’’

IMPACT-se, a Jerusalem-based  watchdog which monitors peace and cultural tolerance in school education, initiated the resolutions and adoption of these measures, keeping the Palestinian curriculum a hot-button issue in the European Union Commission and Parliament.

Marcus Sheff, CEO of the Institute for Monitoring Peace and Cultural Tolerance in School Education (IMPACT-se), noted that EU officials told the group that its report on Palestinian curriculum will be classified. ‘’There now must be a moment of truth for the European Union. Will it continue to ignore the parliament that oversees its spending? Will the Commission now publicly release the freshly- minted report on the Palestinian Authority’s textbooks? Governments, legislators and over a million Palestinian children know what’s in the textbooks. Classifying the report is senseless and frankly, seems highly suspicious,’’ he said.

Daniel Schwammenthal, Director of the American Jewish Committee Transatlantic Institute, praised the European Parliament for condemning the Palestinian Authority’s failure to act against incitement in text books. ”By putting both Ramallah and the EU Commission on notice, lawmakers took a clear stand against EU funds being misused to poison the minds of young Palestinians. Palestinian incitement remains one of the main obstacles to a negotiated two-solution with Israel.”