You are at:Home»Israel»Dozens of world leaders have confirmed their participation in the World Holocaust Forum in Jerusalem

The event, which is titled “Remembering the Holocaust, Fighting Antisemitism,” is being organized by the World Holocaust Forum Foundation, in cooperation with Yad Vashem, under the auspices of the President of the State of Israel, and will mark the 75th anniversary of the liberation of Auschwitz and International Holocaust Remembrance Day.

JERUSALEM—The presidents of Russia, France, Germany, Italy and Austria, respectively Vladimir Putin, Emmanuel Macron, Frank-Walter Steinmeier,  Sergio Mattarella and Alexander Van der Bellen are among the dozens of world leaders who have so far confirmed their attendance in the Fifth World olocaust Forum which will take place in Jerusalem on 23 January, 2020.

The event, which is titled “Remembering the Holocaust, Fighting Antisemitism,” is being organized by the World Holocaust Forum Foundation, in cooperation with Yad Vashem, under the auspices of the President of the State of Israel, and will mark the 75th anniversary of the liberation of Auschwitz and International Holocaust Remembrance Day.

The lead-up to this historic event was officially launched Wednesday at a press conference, held at the President’s Residence in Jerusalem, where President Reuven Rivlin, Foreign Minister Israel Katz, Yad Vashem Chairman Avner Shalev and World Holocaust Forum Foundation President Moshe Kantor spoke about the importance of the event and the urgent need to fight against antisemitism and Holocaust denial.

Israel’s President Reuven Rivlin told the press: “In a few weeks I will be joined by heads of states and world leaders to mark the 75th anniversary of the liberation of Auschwitz-Birkenau. The presidents of Russia, Germany, France, Italy and Austria together with a representative of the United Kingdom and many other leaders, will come to Jerusalem to discuss how we can fight anti-Semitism. We will come together to think about how to pass on Holocaust remembrance to generations who will live in a world without survivors, and what steps we must take to ensure the safety and security of Jews- all around the world.”

The event takes place against the background of the rise in hateful and violent expressions of antisemitism, especially in Europe. Given this alarming situation, efforts to educate about the dangers of antisemitism, racism and xenophobia and foster Holocaust commemoration and research have made this event more crucial and relevant than ever. 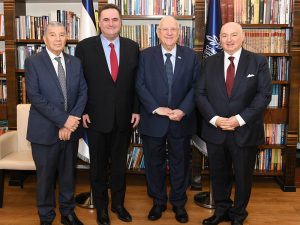 Israeli Foreign Minister Israel Katz, who is the son of Holocaust survivors, said: ‘’ Since those dark days, we have defende, and developed our homeland. Today, the State of Israel is strong and advanced. The IDF ensures that the Jewish People will never again stand defenseless against its enemies. Even so, antisemitism is rising around the world. We see it in violent attacks against Jews, vandalized cemeteries, incitement, and the murder of Jews. The international community must unite against the rise of antisemitism. ”

“Jewish life is once again under threat in Europe. It is under threat from the day-to-day harassment and attacks, on the streets, in schools, at universities, online, and even in their own homes. It has become so bad that the overwhelming majority of Jews in Europe no longer feel safe,’’ said World Holocaust Forum Foundation Founder and President Moshe Kantor.

He continued, ‘’Jews are relentlessly attacked by the Left, the Right, and the mainstream. This is another pivotal point in history where the leaders of the world have to stand up and act. Words are not enough, and I conceived of the World Holocaust Forum to be a place where we can create an action plan to aggressively fight back against antisemitism.”