The Chairman of the Verkhovna Rada, the Ukrainian parliament, Dmytro Razumkov,  assured EAJC President that he would study the issue further.

KIEV—The Euro-Asian Jewish Congress (EAJC) has called on Ukraine to move the country’s embassy in Israel to Jerusalem.

The call was made on Wednesday during the first summit meeting of Eurasian Jewry in Kiev where Jewish leaders from 32 countries of the Euro-Asian region gathered.

In a meeting in the framework of the summit, the Chairman of the Verkhovna Rada, the Ukrainian parliament, Dmytro Razumkov,  assured EAJC President that he would study the issue further.

During the meeting, Mirilashvili also stressed the importance of preserving the historical memory of the Jewish community in Ukraine and taking a firm stand in view of the increasing number of acts of violence against Jewish religious, public, and educational institutions in the country.

In a ceremony following the meeting, a mezuzah was placed at the office entrance of the Ukrainian parliament located on Constitution Square. 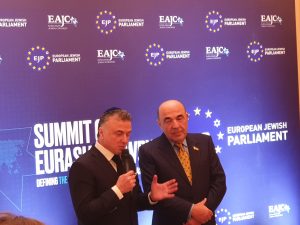 It also adopted a resolution on strengthening the role of youth in preserving Jewish heritage and developing  Jewish life in the Euro-Asian region, and also urged the Jewish leaders of the Euro-Asian region to join in a constructive dialogue on combating anti-Semitism and work toward preventing its further escalation in the region.

As part of the summit, the EAJC held the first joint session with the European Jewish Parliament, an organisation whose stated aim is to be “a uniting structure for all Jewish communities and organizations throughout Western, Eastern and Central Europe.” The European Jewish Parliament which is chaired by Vadim Rabinovich, president of the All-Ukrainian Jewish Congress and leader of the opposition second largest party in the country.  The two organisations have decided to establish a strong partnership.

“The establishment of the Summit of Eurasian Jewry is an historic event that testifies to the unity and mutual responsibility of the Jewish people and is intended for the benefit of the Euro-Asian Jewish communities, including the development of educational and social projects in the region. This important Summit was made possible thanks to a strong partnership and fruitful cooperation of international organizations, such as the Euro-Asian Jewish Congress and the European Jewish Parliament,” said Vadim Rabinovich.

The joint session of EAJC and European Jewish Parliament took place in Anatevka, a village outside Kiev which is the burial place of Rabbi Motel of Chernobyl (the famous Chernobyl Chassidic dynasty and where a new Community Rehab Center – ‘Beit Shmuel’.

This village houses since four years Jewish refugees from eastern Ukraine where the military conflict caused many to lose their homes and possessions. Last May, a new Community Center – ‘Beit Shmuel’ was officially opened in Anatevka. The space serves various community needs and functions as a medical rehabilitation center.