Breaking
You are at:Home»Eastern Europe»Thousands of virtual Holocaust Memorial Plaques to be projected onto Birkenau Gates Monday evening as Yom Hashoah starts

So far, more than 10,000 people (the number which was scheduled to participate in March of the Living 2020) from 60 different countries have laid personal plaques via a dedicated mini-site https://nevermeansnever.motl.org/

The project continues the tradition of remembering and paying tribute to the victims, honoring the survivors and committing to the global fight against antisemitism, hatred and intolerance.

Although the 2020 March of the Living will not take place on Yom Hashoah, Holocaust Memorial Day due, to the coronavirus world pandemic, around 10,000 people have participated in the organization’s virtual memorial plaque project during the last week.

The plaques will be projected on the entrance gate to the Birkenau death camp Monday evening as Holocaust Remembrance Day begins across the Jewish world.

The virtual project launched last week, under the slogan “NeverMeansNever”, gives individuals around the world the opportunity to simulate one of the most meaningful personal moments of The March by composing a personal message and placing it on a virtual plaque along the train tracks in Birkenau.

The project continues the tradition of remembering and paying tribute to the victims, honoring the survivors and committing to the global fight against antisemitism, hatred and intolerance.

So far, more than 10,000 people (the number which was scheduled to participate in March of the Living 2020) from 60 different countries have laid personal plaques via a dedicated mini-site https://nevermeansnever.motl.org/ 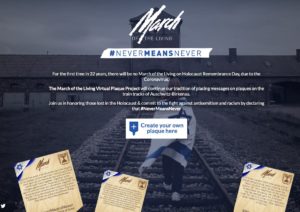 In addition to screening the virtual plaques on the infamous “Arbeit Macht Frei” gates at Auschwitz-Birkenau, the plaques will also be projected onto the wall of Israel’s National Theater – Habima Monday evening. Actors and actresses from the theater will stand for a minute’s silence during a memorial ceremony at Habima.

Meanwhile, on Tuesday a virtual March of the Living ceremony will take place at 7pm EDT and can be viewed live at https://www.motl.org/live/

“This is a Holocaust Memorial Day unlike any other. Yet, its message is more relevant than ever. Remembering and educating about the unparalleled tragedy that is the Holocaust is absolutely vital if we are to eradicate antisemitism, racism and intolerance,” commented March of the Living President, Phyllis Greenberg Heideman. She continued, “I am delighted that The ‘NeverMeansNever’ campaign has given so many people across the world the opportunity to not only honor the victims and survivors of the Holocaust but to express their determination to build a better future.”

“Our mission and our commitment to those who perished and to the survivors, is to remember, to tell their story and to educate about everything that happened,” said Deputy Chair, International March of the Living, Aharon Tamir.

March of the Living is the largest annual international experiental Holocaust education program in the world and has taken place in Poland without interruption since its inception in 1988. Each year thousands of participants from 150 communities around the globe participate in The March, including survivors, students, adults, liberators and educators from the United States, Canada, Argentina, Mexico, Brazil, Panama, Italy, United Kingdom, Japan, Germany, Hungary, France, Australia and Poland.

To date, more than 260,000 March of the Living participants have walked the 3.2 kilometers from Auschwitz to Birkenau in tribute to the greatest loss in the history of the Jewish people and all humanity.