Breaking
You are at:Home»Western Europe»Swastikas daubed on wall of Jewish cemetery in Amsterdam

AMSTERDAM—The outer wall of a Jewish cemetery in Amsterdam was daubed with swastikas last Saturday. Dutch police reported that a suspect has been arrested.

In addition to the swastika, letters were found on the wall. For the time being, it is unknown what these should mean. As soon as the daubing was noticed, the graffiti was removed. Nothing is known yet about the motive of the perpetrator.

The Zeeburg  cemetery is the final resting place where some 80 percent of the Amsterdam Jews were buried between 1714 and 1914. Some 100,000 people are believed to be buried, making it the largest Jewish cemetery in the Netherlands. 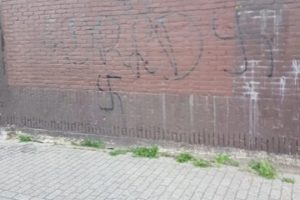 About ten years ago, an initiative was launched to renovate parts of the heavily neglected cemetery. Moroccan, Christian and Jewish young people together restored a number of tombstones of the enormous terrain. From April to October, the resting place can be visited every first Sunday of the month.