You are at:Home»Western Europe»Spanish Socialist Josep Borrell, tapped as next EU ‘Foreign Minister,’ stayed and worked in a kibbutz in the sixties

EU leaders, who have been meeting since Sunday in Brussels in order to agree on the EU top posts, also included in their ‘’package’’ the proposal to nominate a German woman, mostly unknown in EU affairs circles, Ursula vond der Leyen, as the next President of the European Commission, the EU’s executive branch.

BRUSSELS —A Spanish Socialist, Josep Borrell Fontelles, former president of the European Parliament, has been nominated by the European Counicl, the 28 heads of state or government, as the new head of the EU foreign policy.

If this choice is approved by the European Parliament, Borrell, who is currently  Foreign Minister and Minister of European Affirs in the Spanish government of Prime Minister Pedro Sanchez, will succeed Italian Federica Mogherini in November as High Represeentative of the EU for Foreign and Security policy.

The 72-year-old Borrell is the son a baker who used to accompany his father to deliver bread in villages by donkey.

In 1969, he stayed and worked in a kibbutz in Israel where he met his first wife, a French woman.

He joined the Spanish Socialist Workers’ Party (PSOE) in 1975. n 1986 he was elected to the Congress of Deputies, the Spanish parliament, representing Barcelona and remained an MP until 2004.

Borrell served as Deputy Finance Minister, and then public works minister, under former Socialist Prime Minister Felipe Gonzalez, who was in power between 1982 and 1996.

He later dedicated himself to European affairs, serving as president of the European parliament between 2004 and 2007.

In recent years he has been one of the most prominent voices against Catalan independence, delivering a speech at a rally in favor of the unity of Spain in Barcelona in October.

Last year, Spain had been the only EU country that has supported the conclusions of a UN commission of inquiry criticizing Israel’s military response to the violent protests that began at the Gaza border.  The majority of EU countries abstained, and Austria, Bulgaria, Hungary and the Czech Republic voted against.

The Spanish positioning in the conflict has caused the Israeli government of Benjamin Netanyahu to express its displeasure.  The spokesman of the Israeli Ministry of Foreign Affairs, Emmanuel Nahshon, said in March 2018 that the vote of Spain was “shameful and encourages terror”. “Spain was the only European country that voted against Israel and in favor of terror, supporting a biased report that aimed to harm Israel and its right to self-defense,’’ ” he added.

Last November, in a meeting in Madrid with Palestinian Authority Foreign Minister Riyad al-Maliki, Borrell said that the U.S. was losing its traditional mediating role in the Israeli-Palestinian conflict by “aligning” with Israel.

“I regret that the United States, which for many years played a role in contributing to the peace process… are unfortunately disqualifying themselves from playing a mediator role that has the confidence of both parties,” he said.

EU leaders, who have been meeting since Sunday in Brussels in order to agree on the EU top posts, also included in their ‘’package’’ the proposal to nominate a German woman, mostly unknown in EU affairs circles, Ursula vond der Leyen, as the next President of the European Commission, the EU’s executive branch. Von der Leyen, 60,  is currently German Defense Minister and close ally of Chancellor Angela Merkel within her CDU ( Christian Democrat) party. If approved by a majority of the 751 members of the European Parliament, she would become  the first woman to lead the Commission and succeed Jean-Claude Juncker for five years. As German Defense Minister Ursula  von der Leyen visited Israel in 2015    as part of the 50th anniversary of diplomatic relations between the Jewish state and Germany. Last April, she announced that, for the first time in a century, Germany’s military will have rabbis as chaplains. “This is an important signal at a time when anti-Semitism, religious polarization and narrow-mindedness are on the march in many places,” she then stated. 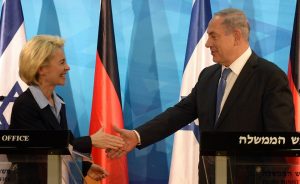 ‘’In choosing von der Leyen, the EU leaders abandoned the so-)called ‘’Spitzenkandidat’’ or “lead candidate” process  by which the European Council is expected to select from among the nominees of the major EU political political groups and which has strong support in the European Parliament,’’ commented Politico.eu.

The leaders also broke with the quarter-century-old tradition of choosing a former head of state or government for the EU’s top job.

The original choice of Dutch Socialist Frans Timmermans or German Christian Democrat Manfred Weber as president of the European Commission – backed by Chancellor Merkel- was opposed by Central and Eastern European countries, in particular Hungary’s Prime Minister Viktotr Orban,  who didn’t support Timmerman’s  critical statements on the rule of law in Hungary.

Announcing the ‘’package’’ of nominations to the press,  Donald Tusk, the Polish President of the European Council, the body that brings together the EU leaders, stated : ‘’First and foremost, we have chosen two women and two men for the four key positions. A perfect gender balance. I am really happy about it. After all Europe is a woman. I think that it was worth waiting for such an outcome.’’

Tusk will be succeeded by Belgian Liberal Charles Michel, caretaker Prime Minister of a government which  collapsed at the end of last year.

The European Parliament will meet on Wednesday to elected its new president who will succeed Italian AntonioTajani.