ATHENS—Unknown vandals entered the cemetery of the Jewish community of Athens during the night of Friday to Saturday and destroyed nine commemorative marble struts kicking them with fury, leaving them to peel off their bases and crushing them on the ground.

These marble slabs are used to mark the sectors of the Cemetery and are dedicated to the memory of the dead by their families.

“On Saturday, the most holy day in Judaism, it is imperative and we are accustomed to abstain from everyday activities and, of course, from announcements. In the context of this almost absolute rigor of observance of the Sabbath holiday, there are exceptions that have to do with dealing with the threat of a life or a great pain,” the community said in a statement.

”Such is the pain that caused us, today, on Saturday, May 5, 2018, the revelation of a new wave of vandalism in the Jewish cemetery of Athens”, Minos Moissis, the President of the Jewish communit,y of Athens, told European Jewish Press (EJP).

“The scene is repulsive and our disappointment is great. This is not the first time we see the result of a degrading act at our cemetery but it is the first time we see such act was organized and planned in part of the Cemetery that is not visible from the neighboring houses and with incredible fury. The view of the results of this abominable act causes us deep sorrow and anger”, he added.

According to the statement, the Jewish community of Athens will exercise all the legal means at its disposal, the first steps have already been taken by the police authorities that immediately came to the collection of clues.

“But besides the law”, said Minos Moissis, “we call upon all the institutions of the State and the City, the Justice, the Religious and Spiritual Authorities of the country and the Civil Society, to condemn unambiguously and without reservation this desecration and to stand with absolutely zero tolerance against such phenomena of violence and intolerance. There is no worse sign of a society’s moral decline than desecration of a Cemetery and disrespect for the dead”.

He stressed that ”it is not just an act that concerns only the Jewish community and is recorded as one of the most violent and significant anti-Semitic events of recent years in Greece.”

”It is about an act that brutally affects the whole of society, the values and principles of a favored state. For these reason, we ask everybody to exhaust every effort to never allow such acts against anyone” Minos Moissis said. 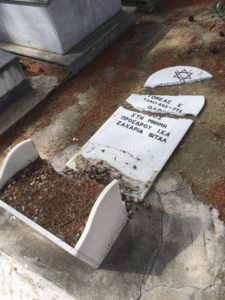 Unknown vandals entered the cemetery of the Jewish Community of Athens during the night of Friday to Saturday, and destroyed nine commemorative marble struts.

George Kaminis, Mayor of Athens, expressed ”the indignation of all citizens, as such events have no place in Athens, in a free and open city that is not terrorized.”

The Jewish cemetery in Nikaia and Monument to the victims of the Holocaust is the second cemetery of the Jewish community of Athens and occupies 20,000 sq.m. within the third cemetery of Athens at 7 Pireos St. in Nikaia, a suburb west of Athens. It came into use after World War II and continues until this day, although the remaining space is very limited.

In 2010 the cemetery was vandalised with anti-Semitic graffiti.