You are at:Home»Israel»Israel’s consulate-general in Miami appointed as foreign ministry spokesperson, replaces Emmanuel Nahshon who is to becomes Israel’s ambassador to Belgium

JERUSALEM—Lior Haiat, currently Israel’s consulate-general in Miami, Florida, has been appointed as the next foreign ministry spokesman.

Haiat, who has been in Miami since 2016, previously served as the foreign ministry’s deputy spokesman from 2007 to 2009, and also spokesman at Israel’s embassies in Argentina and Spain. In addition to Hebrew, he also speaks English, Spanish and Portuguese.

Haiat is s replacing Emmanuel Nahshon, who left the position last month to become Israel’s ambassador to Belgium and Luxembourg. 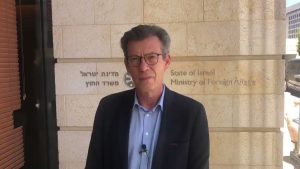