Sergei Lavrov told Italian television on Sunday that Ukrainian President Volodymyr Zelensky’s Jewish origin does not negate the fact that there are Nazi elements in his government, adding that Hitler had also had Jewish blood.

Lavrov told Italian television on Sunday that Ukrainian President Volodymyr Zelensky’s Jewish origin does not negate the fact that there are Nazi elements in his government, adding that Hitler had also had Jewish blood.

“Jews did not kill themselves in the Holocaust,” Lapid declared. “To say that Hitler was of Jewish origin is like saying that Jews killed themselves and we cannot forgive such a comparison,” he said.

“It enrages me not only as foreign minister but also as a son of my father’s who was put in the Budapest ghetto. He was not put there by Jews. He was put there by Nazis,” he said.

“The Nazis persecuted the Jews and killed six million of them. Ukrainians were not Nazis. Only the Nazis were Nazis and they had conducted a systematic eradication of the Jewish people,” the Israeli Foreign Minister said.

The Russian ambassador in Israel was summoned to the foreign ministry in Jerusalem to clarify Lavrov’s comments. Lapid said he expected the ambassador to apologize for the Russian minister’s comments.

“First of all, the Russians should correct their mistake and open history books,” Lapid said.

Israeli Prime Minister Naftali Bennett, who has been more cautious in his criticism of Russia’s invasion than Lapid, also slammed Lavrov’s comments. “His words are untrue and their intentions are wrong,” he said. “Using the Holocaust of the Jewish people as a political tool must cease immediately.”

“Lies such as these mean to blame Jews for the horrible crimes committed against them throughout history and by doing so, remove responsibility from their enemies.” 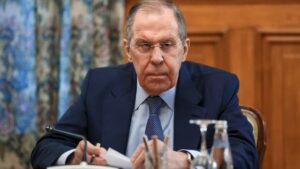 Yad Vashem, the World Holocaust Remembrance Center in Jerusalem, which is dedicated to Holocaust commemoration, documentation, research and education, issued the following statement: “The remarks of Russian Foreign Minister Sergeĭ Lavrov, as quoted, are absurd, delusional, dangerous and deserving of condemnation.  Lavrov is propagating the inversion of the Holocaust – turning the victims into the criminals on the basis of promoting a completely unfounded claim that Hitler was of Jewish descent.’’

‘’Equally serious is calling the Ukrainians in general, and President Zelensky in particular, Nazis. This, among other things, is a complete distortion of the history and an affront to the victims of Nazism.”

Ukrainian Foreign Minister Dmytro Kuleba commented Lavrov’s remarks by saying: “This is the perverted logic of the Russian elite.’’

‘’Let’s admit the fact that Russians hate other nations. They believe in the supremacy of their own nation over others, and this is why this regime must be stopped in its aggressive plans and actions,” he added.