(JNS) From the advent of below-article comments, anti-Israel activists have been taking advantage of online forums and social media to sew lies and hateful messaging about the Jewish state.

It has taken awhile, but the government of Israel and a powerful network of pro-Israel advocates in the private sector are now proving to be a formidable opponent to the Israel-haters in countering anti-Semitic bias and spreading positive stories that represent the real face of Israel.

“For the first time, BDS [Boycott, Divestment and Sanctions] groups are on the defensive,” declared Gilad Erdan, Israel’s Minister of Strategic Affairs and Public Diplomacy to a group of more than 60 social-media experts gathered in Jerusalem on Monday and Tuesday for the three-day #DigiTell18 Conference sponsored by the Ministry.

Participants arrived from 15 countries spanning six continents to hear from leading global digital experts in the private and public sectors, including Google, Facebook, Snapchat, Outbrain and the Prime Minister’s Office, about strategies and insights towards becoming better Israel activists online.

To counter the bias, Erdan said the “key roles of the pro-Israel community” are to flag anti-Semitic and inappropriate content on social platforms. He also noted exposing “pallywood productions” made by pro-Palestinian activists to paint Israel in a poor light through the intentional misuse and framing of images and videos.

David Keyes, Israeli Prime Minister Benjamin Netanyahu’s foreign-media spokesman, discussed at length the powers of persuasion in communicating Israel’s messages in a nearly impossible messaging environment. “We are facing a ‘disinformation apocalypse’ unlike anything we have ever seen,” he stated.

Keyes suggested that the group focus on empathy when communicating, noting that single stories have proven themselves to be more effective than communicating larger numbers and trends when attempting to counter lies and convince an audience of Israel’s merits.

“Anytime you can take an abstract idea and boil it down into a story, you can have fantastic results,” he said. “Better than explaining that 1,000 people were killed in a terror attack . . . it would be much more powerful if you can tell a single story. If you find a salient story, that is a gold mine.”

He explained that the prime minister has adopted these principles, and taken to video and social media, often bypassing traditional media to communicate his messages.

“Traditional media is dying a slow and painful death,” Keyes asserted, noting that now Netanyahu’s social-media channels and videos can “get tens of millions of views on any given day.”

“Short-form video is changing the world,” said Keyes. “If it is provocative, people will share it.”

Keyes told JNS that “the prime minister keenly understands the power of social media and new technology to get Israel’s message out,” while noting that Netanyahu is a “phenomenal communicator.” 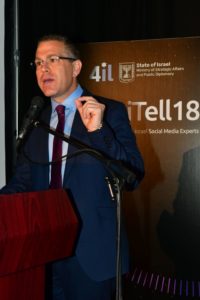 Gilad Erdan, Israel’s Minister of Strategic Affairs and Public Diplomacy: “For the first time, BDS [Boycott, Divestment and Sanctions] groups are on the defensive.”
Picture by Rafi Kuts.

“For decades, he has been telling the truth about Israel in a way that few other people have—maybe in a way that no one else has,” said Keyes.

Yet he noted to the group that the ability of the Prime Minister Office to tell the story of Israel is not as powerful as the collective “fusion of people with organic followings.”

Keyes implored the group to better understand the audiences with which they wish to communicate. Taking the social-media experts by surprise, he noted that repeated studies of millennials show that the issue they care most about is global warming. Keyes then challenged the group to “ ‘Google’ Iran and global warming.

“If you look at publications like Vox that are getting millions of views, you would get the impression that Iran is a paragon of global warming,” Keyes said, suggesting, for example, that Israel’s pro-Israel community counter the efforts of Iran to engage millennials by writing about “what is Iran is doing to destroy the environment.”

Keyes related a story about the time he was at a lunch with the foreign minister of Iran before he served as adviser to the prime minister: “If you listen to the way he tells it, he sounds like a cross between Mother Theresa and Gandhi.”

“Telling stories in new and innovative ways is the way to succeed,” said Keyes, adding “never hesitate to go on the offense.”

Keyes and Erdan expressed their hope that pro-Israel activists would ultimately win the battle in digital media to promote Israel and expose Israel’s enemies.

Erdan said the most powerful asset the group has at its disposal is the truth, and congratulated the conference participants for coming together to strengthen their skills. He encouraged the group to continue to publish and promote innovative content because “the work is urgent.”

“I look forward to seeing the results,” he said, “and to retweeting them.”