You are at:Home»Western Europe»At least 20 Jews among the coronavirus deaths in the U.K.

5% of the deaths in the country are Jewish people. ‘’This is huge as the Jewish population represents only 0.3% of the total population of 66 milion,” says Jacob Jonah, reporter for The Jewish Chronicle in London. Around 250,000 Jews live in the U.K.

At least 20 members of the Jewish community in the United Kingdom have died after contracting the Covid-19 virus, Board of Deputies of British Jews (BOD) President Marie van der Zyl said as she delivered a message to those who have lost loved ones and those who are caring for the sick.

‘These figures show our community is not immune,’’ she stressed on the BOD website.

The BOD president said:  ‘’There is no higher value in Judaism than preserving life, so please, do everything you can to follow the government’s guidelines and stay home unless you absolutely cannot.’’ ‘’For our part at the Board of Deputies, we care about communities large and small and we are doing all we can to maximise the continuity of Jewish life through this process and ensure we can celebrate a happy and healthy Pesach.’’ ‘’ We will get through this, but it needs everyone to play their part,” Marie van der Zyl added.

More than 9,529 cases of coronavirus have been confirmed in the UK, but the actual number of cases is estimated to be much higher.

As far as Thursday, 465 people have died from the virus in a total population of 66 million.

While initially the British government has had a different approach to the crisis than other European countrie, in a bid to slow the virus’s spread, British Prime Minister Boris Johnson urged last week everyone to stay at home. Only exception is  if you are an emergency worker, a doctor for example, or to go buy food or exercise. Police have been given powers to fine people deliberately flouting the new restrictions, which would last for an initial period of three weeks.

Most shops, apart from those selling food and medicines, have now closed. Schools have shut their doors, except for vulnerable pupils or children of key workers. Cafes, bars, leisure centres and other social venues have also been told to shut.

The government had earlier asked people to work from home where possible and halt all unnecessary travel. Those aged over 70 have also been asked to self isolate at home over the coming weeks and letters are being sent to 1.5 million people in England who are most at risk of coronavirus, urging them to stay at home.

New restrictive measures might be taken in the next few days that will tighten the lockdown. ‘’I imagine that soon or later the situation will get worse,’’ Jacob Jonah, a reporter for The Jewish Chronicle, told the European Jewish Press.

‘’It is not yet a total lockdown. People can still go outside but you can do this only in very limited circumstances.’’

Regarding the Jewish community, Jonah said 5% of the deaths in the country are Jewish people. ‘’This is huge as the Jewish population represents only 0.3% of the total population of 66 milion. Around 250,000 Jews live in the U.K.

‘’I am sure that the number of deaths in the Jewish community is higher than 22,’’ he said.

He gave several reasons to explain why the number of deaths within the Jewish community is so high. ‘’One is the fact that synagogues were open relatively late. Synagogues are obviously key vectors in transmitting the disease. Two, is the fact that outside of the Orthodox community, people in the Jewish community are quiet older. With more risks especially for those going to synagogues, especially in cities like London, which is the biggest hot spot in the UK.’’

He also noted that in the ultra-orthodox community, centers have closed very late such as mikvahs and yeshivas.

However, at the beginning of last week, most synagogues were closed, including yeshivas, Jewish schools. In the ultra-Orthodox community there was a big argument about what to do and how quickly to close. Cemeteries are limiting the number of people who can attend burials. ‘’Today, two of them even banned people attending the finerals,’’ said Jacob Jonah. ‘’I just saw that circumcisions within the progressive community have been postponed today.’’ 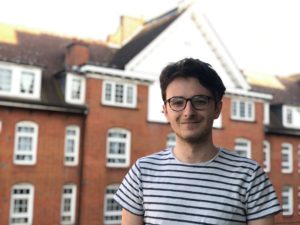 Jacob Judah, reporter for The Jewish Chronicle, says 5% of the deaths in the country are Jewish people. ‘’This is huge as the Jewish population represents only 0.3% of the total population of 66 milion. Around 250,000 Jews live in the U.K.

Attendance at Orthodox circumcisions is to be restricted to a bare minimum, while the Progressive movements are suspending the ceremony altogether, following the latest restrictions on government gatherings announced earlier this week.

‘We are generallty following what the government is recommending.’’

The Jewish community is generally good in helping those in need. But each community is running its own program: the Sephardic community, the United Synagogues, the Reform ….But nobody is forgotten,’’ says Jonah. A Jewish family has raised 40,000 pounds to help vulnerable families in north London.

In view of Pesach or Passover holiday, a lot of kosher supermarkets are organizing free deliveries, going house to house, giving people the Kosher for Passover products.

‘’People in the community need to know what is shut down or open,what can I do, who is in need, how can I get money to people who are in need, what are community leaders and rabbis say about the confinement.  This is the role The Jewish Chronicle can play.’’

‘’This is also important to know for people who don’t have Internet. That’s why the print edition is still delivered at home to elderly people.’’