Breaking
You are at:Home»Western Europe»‘Antisemitism is not just a Jewish problem.It’s a European and global issue’, says EU Commission Vice-President Schinas

Addressing a conference organised by the German EU presidency, he stressed that the fight for normality of Jewish life ‘’requires concerted efforts by all European Institutions and all Members States. It is a litmus test for Europe, in upholding our values and our diversity.’’

The EU Fundamental Rights Agency annual overview on antisemitism shows that most incidents of hatred against Jews go unreported.

He added: ‘’Antisemitism has no place in the European Union. Together with the German Presidency of the Council, we are stepping up our efforts to ensure the safety of Jewish communities, counter the surge of antisemitic conspiracy myths online and invest in education, awareness-raising and research.’’

He stressed that the fight for normality of Jewish life ‘’requires concerted efforts by all European Institutions and all Members States. It is a litmus test for Europe, in upholding our values and our diversity.’’

He recalled that the European Commission, together with UNESCO and the World Jewish Congress, launched a dedicated online campaign to debunk disinformation and encourage citizens to think before sharing content online.

‘’But it is clear that to address the issue in all its dimensions we need a comprehensive approach and increased coordination within and amongst our Member States,’’ Schinas added.

The EU Fundamental Rights Agency (FRA), which provides advice to EU and national decision makers, has just published its annual overview on antisemitism. It shows that most incidents of hatred against Jews go unreported. ‘’This, coupled with large data gaps, masks the true extent of antisemitism and hampers efforts to formulate effective responses,’’ according to FRA.

In his address to the conference titled ‘’Working together to fight antisemitism in Europe: Structures and strategies for a holistic approach,” the EU Commission Vice-President deplored the fact that ‘’we are still not able to compare antisemitic hate crime data across Europe, as methodologies and criteria differ from one Member State to another, and in many countries there is almost no overview of the problem.’’

‘’It is imperative that we improve on this, because it means we are dealing with a threat the extent of which remains largely unknown,’’ he said.

He noted that in order to increase efforts to better match police statistics with civil society and Jewish community data, the Commission invested this year almost 8 million euros to this objective. The Commissioner said he will make sure that the actions on antisemitism are considered in the framework of the new 7-year ambitious Multi-Annual Financial Framework agreed recently by EU leaders.

‘’Together with Member States, we are holding a series of dedicated discussions amongst experts to improve the whole enforcement chain on hate crimes, including through police training, victim-support structures and better data collection,’’ Schinas explained.

‘’You can’t fight what you can’t define,’’ Schinas said as he emphazised the importance of the working definition of antisemitism by the International Holocaust Remembrance Alliance (IHRA) which is considered as the benchmark for developing a victim-centred approach.

18 EU member states have so far adopted the definition. ‘’I would urge all others to move in the same direction, in line with the commitment made in the 2018 Council declaration on the fight against antisemitism,’’ he said.

The Commission is working together with the IHRA to issue practical guidance on the use of the definition before the end of the year, highlighting best-practice examples.

The EU Commissioner also insisted on the need to develop a holistic approach in the fight against antisemitism on security, education and supporting Jewish life in Europe. 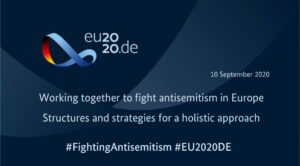 The German Presidency of the EU Council is committed to give new impetus to the collective efforts against antisemitism. It is intended to bring the various stakeholders at EU level together to give new momentum to Europe-wide efforts to stop rising antisemitism.

He commended the the seven EU Member States who have adopted or are in the process of adopting a self-standing strategy on antisemitism and the further seven countries that have introduced specific measures on antisemitism.

‘’This is a commitment all Member States took in 2018, and remains as pressing as ever. Antisemitism affects every EU country, even the ones with small or no Jewish communities. Every other European believes that antisemitism is a problem in his or her country,’’ Schinas said.

‘’Our Jewish fellow citizens should feel safe and free to lead their lives, work, study, practice and celebrate their faith like every other member of society. This is the essence of our European way of life,’’ he continued.

He said the EU Commission and the German presidency ‘’wish to keep the issue of antisemitism high up in the EU’s political agenda over the coming months. We will be reaching out to ministers responsible for combating antisemitism, to see how – together we can accelerate progress towards the adoption of national strategies,’’ he concluded.