Breaking
You are at:Home»Others»Qassem Soleimani was behind the 1994 bombing attack against the AMIA Jewish center in Buenos Aires

BUENOS AIRES—Iran’s General Qassem Soleimani, , the head of the IRGC Al Quds unit, killed in a US airstrike in Iraq last week, was behind the bombing attack on the Mutual Israeli Argentine Association (Amia) Jewish center in Buenos Aires on July 18, 1994, according to Argentinian media reports said.

The terrorist act, the worst in the history of Argentina, was triggered by a van loaded with 400 kilos of explosives and left 85 people dead and 300 injured. Two years earlier, another attack destroyed the Israeli embassy building in Buenos Aires.

An Hezbollah operative has been accused of being the mastermind behind the attack ordered by Iran.

SoleimanI has been named in the AMIA case in Argentina since 2003 in, a report but was never charged, Argentinian daily newspaper Clarin reported.

Soleimani, as head of the Qods Force, was in charge of the operations outside Iran of the Guardians of the Revolution  and was present on the ground in Syria and Iraq, supervising the militias backed by Tehran in both Arab countries. The Quds or Qods Force, led by Soleimani, is a foreign intervention body that is part of the Revolutionary Guard of the Islamic Republic of Iran.

For the US and Israel, he was a shadowy figure in command of Iran’s proxy forces, responsible for fighters in Syria backing President Bashar Assad and for the deaths of American troops in Iraq. Western leaders saw him as central to Iran’s ties with terror groups including Hezbollah and Hamas. He was active in Iraq, central to its current politics, and consequently loathed by Iraqis who have demonstrated for months against a government they see as beholden to Iran.

The president of Brazil, Jair Bolsonaro, who supported the US operation in which Soleimani was killed,  claimed to have received information that the commander of the Iranian Quds Force participated in the attack on the Argentine Jewish group in  1994.

“His previous life [that of Soleimani]focused largely on terrorism. And we, here in Brazil, our position is very simple: everything we can do to combat terrorism, we will do,” Bolsonaro said.

Soleimani’s involvement in  the Buenos Aires bombing was remembered by Israeli politicians and newspapers on Friday.

“I congratulate President Donald Trump and the entire Middle East for the action that killed Soleimani,” said Yair Lapid, leader of the Israeli Blue and White opposition party.

“He has planned and led deadly terrorist attacks from Damascus to Buenos Aires and is responsible for the murder of thousands of innocent civilians. He got exactly what he deserved, ”he said.

The order for action in Buenos Aires reportedly came from Ayatollah Ali Khamenei, Iran’s supreme leader, during a meeting held in August 1993. It was up to Soleimani to organize the action over the next 11 months.

Soleimani however drew attention of the Argentinina judicial authorities when he paid tribute to the former head of the foreign security service of Lebanese Hezbollah, roup Imad Moughnieh, who was accused of having been the brain behind the bombing of the AMIA building.

In Lebanon, Soleimani had been seen praying alone on the tomb of Imad Mougnieh who was killed by Israel.” 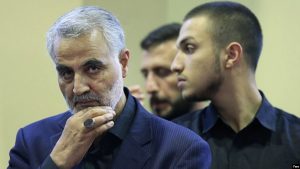 Soleimani however drew attention of the Argentinina judicial authorities when he paid tribute to the former head of the foreign security service of Lebanese Hezbollah, group Imad Moughnieh, who was accused of having been the brain behind the bombing of the AMIA building in Buenos Aires in July 1994.

“Hezbollah swore revenge after one of its main commanders, Imad Moughnieh, was killed in an attack in Damascus for which the group held Israel responsible.

When Moughnieh was killed in 2008, the Argentinian prosecutor in charge of the AMIA bombing investigation, Alberto Nisman, told reporters he was “the chief operating officer of the attack.” For his part, the criminal secretary of the Supreme Court, Esteban Canevari, said that Moughnieh led the “group responsible for committing attacks outside Lebanon.” Nisman was found dead in his apartment in… hours before he was due to ……………
A 11-page report in English claimed that two members of the Quds Force Kaml Za’re and Karim Zadeh would have been in Argentina in 1993, supposedly doing intelligence tasks prior to 1994 attack. It said that Ashari was sent as the third secretary of the Iranian embassy in Buenos Aires to allegedly take over the attack plan.

The document gives a detailed explanation of the birth and expansion of the Quds Force, its organization and its alleged terrorist attacks abroad.

Facsimile of part of the reserved report on Soleimani incorporated in the AMIA case.

The report was delivered to the Argentine embassy in London because since August 21 of that year the former Iranian ambassador to Buenos Aires, Hadi Soleimanpour, had been arrested by Scotland Yard at the request of Judge Galeano.

Soleimanpour was another suspect of having supported the Hezbollah group that perpetrated the attack.

Finally, the extradition did not materialize because the British Interior Ministry did not want to face the risk posed by the measure and after the English embassy in Tehran was shot.

However, although Soleimani was cited in the report, he was never charged.