Breaking
You are at:Home»Eastern Europe»Leading European Rabbi: ‘I have never heard so many concerned voices from my fellow Rabbis at the situation affecting Jewry in Europe’

BUCHAREST—“Never before have I heard so many concerned voices from my fellow Rabbis at the situation affecting Jewry in Europe,” said Rabbi Menachem Margolin, Director of the Rabbinical Center of Europe (RCE) as he addressed in Bucharest a conference which gathered 300 rabbis from 27 countries across Europe.

The idea of the conference was to give the spiritual leaders of the Jewish communities in Europe the knowledge, strength, tools and support they need to fulfil successfully their role.

But Margolin  deplored that “instead of spending our time talking about the enriching and continuing development of Jewish life in Europe, we find ourselves  talking about existential threats in the form of legislation from many countries that, if implemented, mark the beginning of the end of Jewish life there”.

He was talking about laws in various countries that ban kosher food, kosher slaughter, circumcision, the way we choose to dress… ”It seems it’s fair game from some politicians scraping the very bottom of the populist barrel,” Margolin added.

“Enough is enough,’’ he stressed. warning of the danger of the prospect of ‘’no future for European Jewry.’’ ’’We must wake the EU from its dangerous slumber. We will begin a large and effective outreach drive from across our membership to EU leaders,’’ he continued.

“Our message is a simple one: You say you believe and enshrine freedom of religion. You say it’s an intrinsic part of EU membership. Prove it! Every week, we are taking legal cases against member states to defend our way of life from needless and discriminatory legislation. Words are not enough. We need concrete action from the EU leadership, to make it clear that such legislation is out of step with European values of tolerance and respect. And that breaching these values carries with it penalties.” 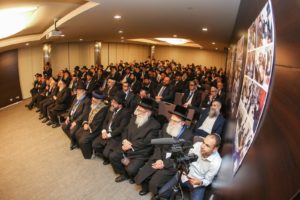 The RCE conference in Bucharest was attended by 300 rabbis from 27 countries across Europe.

Founded in 2000 and based in Brussels, the Rabbinical Centre of Europe’s principal objective is to extend the reach of Torah and kedushah throughout Europe, and to be a daily  support system for the community rabbis there. It aims to strengthen the spiritual infrastructure of Europe’s Jewish communities ;

The organization has gained a reputation for being a source of assistance to which Europe’s rabbis can turn for every challenge they encounter, to help them deal with all questions and issues relating to Jewish communities throughout Europe.