You are at:Home»USA»Outrage ensues over anti-Semitic cartoon published in The New York Times

The newspaper quickly took down the cartoon and apologized, acknowledging that the piece was “offensive,” “included antisemitic tropes,” and that “it was an error of judgment to publish it.”

By JNS and the contribution of EJP

”The New York Times International Edition printed a political cartoon during Passover featuring a blind U.S. President Donald Trump wearing a yarmulke, sporting dark-tinted glasses and being led by a dog with the face of Israeli Prime Minister Benjamin Netanyahu with a large blue Star of David hanging from its collar.

The cartoon sparked outrage and accusations that the celebrated newspaper is peddling anti-Semitic tropes.

Appearing in the April 25 edition, the cartoon was available in the edition prior to the seventh day of Passover, but was taken down by Saturday afternoon.

It wrote: “A political cartoon in the international print edition of The New York Times on Thursday included anti-Semitic tropes, depicting the prime minister of Israel as a guide dog with a Star of David collar leading the president of the United States, shown wearing a skullcap,” the Times statement said. “The image was offensive, and it was an error of judgment to publish it. It was provided by The New York Times News Service and Syndicate, which has since deleted it.”

The Times tweeted on The New York Times Opinion account that the piece was “offensive, and it was an error of judgment to publish it,” and that it “included antisemitic tropes.”

Responses throughout the Jewish world were swift and severe. 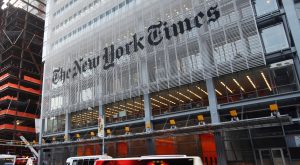 The paper acknowledged on Saturday that a cartoon it published in its international edition “included anti-Semitic tropes” and called its running the image an “error of judgment.” The Times did not explicitly apologize for carrying the cartoon.

“Another disgusting display of vile anti-Semitic tropes celebrated in The NY Times World,” wrote Jewish philanthropist Israeli-American Adam Milstein. “The NY Times is signaling to the world that antisemitism is real, here and welcome.”

Renowned legal expert and emeritus professor at Harvard University Law School Alan Dershowitz said, “Anti-Zionism is becoming an acceptable cover for anti-Semitism,” and added that the paper “owes its readers more than an apology.”

Consul General of Israel in New York Dani Dayan reportedly contacted the Times to express Israel’s opinion that the cartoon was unacceptable, and accused the Times of publicizing anti-Semitic tropes.

CEO of the Foundation for Defense of Democracies Mark Dubowitz tweeted, “A Jewish Netanyahu dog leading a blind Jewish looking Trump around. From the @nytimes international edition. This is how far we have fallen. Despicable.”

“This is just terrible the @NYT in an outrageous #antisemitic cartoon from Thursday’s international edition,” wrote retired Israel Defense Forces lieutenant colonel Peter Lerner. “Depicting a ‘Jew dog’ @Netanyahu, leading a blind converted @realDonaldTrump. No words on the page, nothing to do with the news, just spiteful antisemitism.”

Congressman Dan Crenshaw  (R-Texas) wrote that “even if unintentional, the left has normalized antisemitism under the guise of criticizing U.S.-Israel foreign policy.”

“So. Are we clear now that NYT folks can no longer pin the rise of anti-Semitism on the far right? Retraction or not, nobody has done more to mainstream it than NYT in this one moment,” tweeted journalist David Hazony, former editor-in-chief at Azure and The Tower.

Journalist Joyce Karam of The National decried the cartoon as “disgusting and sloppy,” with Harry Cherry of The Jewish Voice stating “this apology isn’t enough.”

Trump’s son, Donald Trump Jr., slammed the paper for printing the cartoon, tweeting, “Disgusting. I have no words for flagrant anti-Semitism on display here. Imagine this was in something other than a leftist newspaper?”