Breaking
You are at:Home»Western Europe»World leaders and houses of worship join International March of The Living Kristallnacht campaign

On November 9, 1938, a two-day pogrom began during which the Nazis burned more than 1,400 Synagogues and Jewish institutions in Germany and Austria on ‘Kristallnacht’ (The Night of Broken Glass), a critical moment in the chain of events that led to the Holocaust.

Personal prayers and messages from the virtual campaign are projected on the Walls of the Old City of Jerusalem and Coventry Cathedral in the UK.

Thousands of people around the world took part in the March of the Living’s global interfaith campaign “Let There Be Light”, to mark the anniversary of Kristallnacht or ‘’Night of Broken Glass’’, a two-day pogrom during which the Nazis burned more than 1,400 Synagogues and Jewish institutions in Germany and Austria, a critical moment in the chain of events that led to the Holocaust.

The initiative took place in partnership with the Jewish Community of Frankfurt am Main and the Miller Center at Rutgers University. Participants in the campaign sent messages against anti-Semitism, hatred and intolerance and included world leaders, Kristallnacht and Holocaust survivors, public figures, celebrities, global organizations, Rabbis, Imams and Priests.

Participants in the “Let There Be Light” campaign left messages of hope on the campaign website: www.motl.org/let-there-be-light. Many of these messages are projected onto the walls of the Old City of Jerusalem and the UK’s famous Coventry Cathedral, which was severely damaged by Nazi bombing during World War II.

In addition, hundreds of Synagogues, Churches and Mosques from over fifty countries pledged to keep their lights on Monday night, as a unified symbol of light and hope against the backdrop of rising antisemitism, racism and hatred.

Participating Houses of Worship include the Great Choral Synagogue in Kiev and dozens of Ukrainian Synagogues, the Westend Synagogue in Frankfurt (one of the few not destroyed on Kristallnacht), Synagogues in Bahrain and Dubai, and Synagogues and Churches across the United States, UK and Japan, as well as a mosque in New York. https://kristallnacht.motl.org/he/houses-of-worship-institutions/

British Prime Minister Boris Johnson said, “That night of glass led to humanity’s darkest moment. Today we unite against anti-Semitism, racism and intolerance. We will never let the light go out.”

Israel’s President Reuven Rivlin said, “While the ovens of the Nazi crematoria have long been extinguished, the flames that consumed Jewish houses of worship, homes and businesses on Kristallnacht burn to this day; flames of hatred and racism. My hope and prayer is that mankind will learn from history.”

Israel’s Prime Minister Benjamin Netanyahu said, “On the 82nd anniversary of Kristallnacht, we remember the night that marked the beginning of the Holocaust.  We vow that the Jewish people will never again be defenseless against the forces that seek our destruction.”

Israel’s Minister of Defense Benny Gantz said, “Tonight, we are reminded of the insufferable price of hatred, and the destructive power of human evil. And in the face of forces who wish us harm, we stand firm, strong, and secure in our own country, stating clearly: Never Again.” 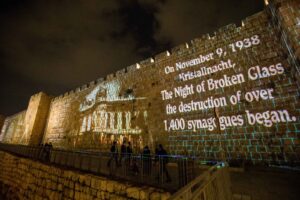 Picture by March of the Living and Oren Ben Hakoon.

The President of International March of the Living, Phyllis Greenberg Heideman said, “We have no choice but to continue remembering the Holocaust, whatever the circumstances. We cannot stand silent when we see anti-Semitic attacks occurring and when hatred and intolerance raise their ugly head. The message of this campaign is a message of hope that together we can shine a light towards a brighter future.”

Facebook has also given its support to the “Let There Be Light” campaign. Head of Policy, Israel & the Jewish Diaspora at Facebook, Jordana Cutler said, “Following a demonstrated rise in anti-Semitism around the world, we are proud that a campaign such as Let There Be Light is using Facebook to encourage people around the world to stand together against antisemitism, racism, hatred and intolerance.”

Facebook recently strengthened its policies towards anti-Semitism and Holocaust denial, as part of the company’s efforts to combat such content.

Holocaust and Kristallnacht survivor, Eve Kugler was seven years old at the time of Kristallnacht in the German town of Halle, where just two years ago the synagogue was attacked. She said, “In the middle of the night five uniformed SS officers and the local police chief, trashed our apartment and led my father out of our home. The synagogue which my grandfather had established was torched and burned to the ground. Two years ago, I was absolutely horrified to hear about the violent anti-Semitic attack on Halle synagogue. I felt it was an attack on my own synagogue. I say “don’t be a bystander. It is your duty to speak up and act to make the world a better, safer, happier place.”