Breaking
You are at:Home»Western Europe»UK Jewish community to demonstrate on Sunday against antisemitism in France after Sarah Halimi’s murderer spared trial

In France today, it is possible to be sentenced to a year in prison for throwing a dog from a window whilst high on cocaine, but if you hurl a Jew to their death whilst on cannabis, you walk free.

“It is intolerable that a leading European nation is so abjectly failing to stop the persecution of its Jewish population.”

In New York, the Combat Anti-Semitism Movement has launched a global social media campaign to protest the French court decision.

The British Jewish community will be demonstrating outside the Embassy on France in London on Sunday, joining a day of global protests by Jewish communities around the world following the decision by France’s Supreme Court to spare an antisemitic murderer from trial because he was high on cannabis at the time that he committed his crime.

The Covid-compliant protest rally is organized by  Campaign Against Antisemitism. Rallies are being held the same day in cities across France, Israel and the United States.

On 4th April 2017, Sarah Halimi, a 65-year-old retired doctor and schoolteacher, found a man in her Paris apartment. It was her neighbour Kobili Traoré, who had subjected her to years of antisemitic abuse. He savagely beat her, shouting “Allahu akhbar” and then hurled her from her window to her death, shouting “I killed the shaitan [demon]”.

For months, French authorities refused to admit the antisemitic nature of his crime. Sarah Halimi’s murderer, a violent drug dealer, claimed that he had felt “possessed” because he was high on cannabis and should not be held responsible.

Last week, France’s Court de Cassation, the country’s highest court,  agreed with him. Sarah Halimi’s family is now considering an appeal to the European Court of Human Rights and action in Israeli courts.

In France today, it is possible to be sentenced to a year in prison for throwing a dog from a window whilst high on cocaine, but if you hurl a Jew to their death whilst on cannabis, you walk free.

‘’For years, France has gradually betrayed its Jews by allowing antisemitism to run rampant, putting French Jews in fear,’’ says Campaign against Antisemitism.

“During the Holocaust, French authorities were too often complicit in the genocide of French Jews. After the war, the nation vowed to defend what remained of its Jewish population. The decision of France’s highest court that torturing and throwing an elderly Jewish woman out of a window cannot be ascribed to antisemitic motivations if the attacker is high, is a betrayal of that pledge,’’ stated a spokesperson for Campaign Against Antisemitism. 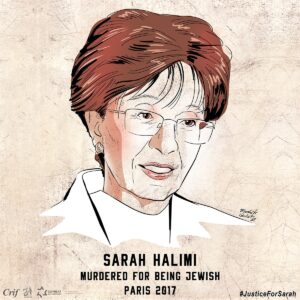 “For decades, French Jews have suffered antisemitic abuse, violence and terrorism. Antisemitism in France is out of control, with incidents rising 121% since 2017, and Jews, who comprise 1% of France’s population, bearing the brunt of 41% of hate crimes.

“It is intolerable that a leading European nation is so abjectly failing to stop the persecution of its Jewish population,” the spokesperson concluded.

Utilizing its global coalition of hundreds of thousands of grassroots interfaith activists, CAM is asking people across the world to join its virtual campaign to show solidarity with Halimi’s family and the Jewish community of France, in the firm belief that anti-Semitism must never be excused and that hate crimes must not be allowed to go unpunished.

CAM has produced specially crafted images of Sarah Halimi, designed for sharing on social media, carrying the tagline in French, English and other languages, “Sarah Halimi – Murdered for being Jewish – Paris 2017”. People are encouraged to use the hashtags #JusticeForSarah and #JeSuisSarah and to share the following message on social media platforms.

The virtual campaign is designed to demonstrate solidarity with Sarah Halimi’s family and France’s Jewish community whose leaders have called for a massive public rally in Paris today (Sunday 25 April) at 2:00 PM local time, at the Parvis des Droits de l’Homme, Place du Trocadéro. It will be the community’s largest public demonstration since the Corona pandemic began. Protests will also take place in the U.S. in New York, Miami and  Los Angeles.